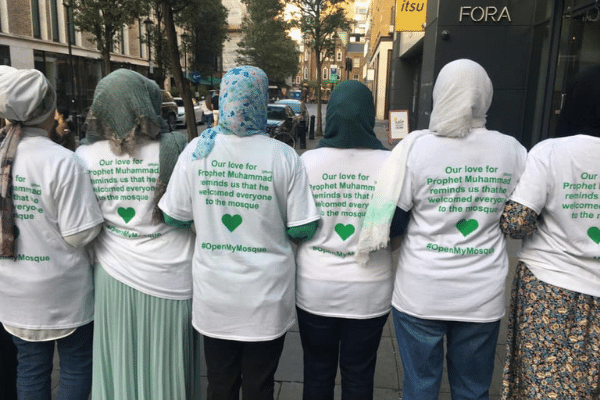 As most of us already know that women praying at the mosque is still considered a stigma within the community. Almost 1/3rd of mosques in Britain do not have registered places for women to pray. In those mosques that do have a place to pray, it is often found that women are not included within the mosque board.

#OpenMyMosque is a campaign started by Julie Siddiqi and Anna Nayyar in 2015 as a response to the Muslim Council of Britain’s #VisitMyMosque campaign that provides support to over 250 mosques across the UK to hold open days. A group of women got together to discuss how ironic it was that mosques are opening their doors to everyone, which is very positive, but they as Muslim women often don’t feel welcome.

#OpenMyMosque started gathering stories of incidents, experiences and hardships that women face to offer prayers at their local mosques.

Julie Siddiqi, the co-founder of the #OpenMyMosque campaign said, “During Covid, my local mosque and several other mosques used Covid as an excuse to not let women offer their prayers at the mosque.

“I was upset about that and called it out publicly, I did receive some local backlash but what it did was start a conversation.

“Everyone knows these issues exist, no one wants to speak out though. I had women and men from the local area and around the country thanking me for speaking up.”

She received messages of support from women all around Britain sharing stories of their horrible and traumatic experiences.

Last month, she came across this video of two women who were evicted by force from a mosque in Soho, London. The incident was filmed and it captured the aggression and the traumatic experience for the women, on camera.

She added: “The aggression we see in the video is an illustration of this mindset that makes Muslim men think they can behave like that with young Muslim women and we are trying to expose that mindset.”

In response to that and after speaking to the two young women in the video, the #OpenMyMosque team thought it was an opportunity to do something visual so they organised a peaceful prayer outside the mosque as a symbolic statement.

She said: “We are happy we did what we did and it has generated more conversations. We have had a lot of support from both women and men. There has been some criticism but most Muslims know that this issue cannot continue to be ignored.”

So what did The Prophet (PBUH) say about women praying at the mosque?

Of the two Hadith mentioned at the beginning, the Hadith regarding women praying in the innermost part of her home, there is no command. It’s simply describing a preference for women to pray at home. In contrast, the Hadith addressed to men first issues a command, that they must not prevent women from the mosque, which indicates a prohibition.

Additionally, the Hadith regarding women praying at home relates to the rights of Allah. So the recommendation given in the Hadith is a private one between servant and God. No one but He can command a woman to act upon this.

The context of the Ahadeeth:

When looking at a hadith, it’s important to understand its context: The Prophet (PBUH) was once describing the rewards of praying in the mosque to a group of companions. The women spoke up, complaining that since young children occupied their time at home, they wouldn’t always be able to attend the mosque and thus be deprived of this reward. The Prophet (PBUH) tells them in consolation that they get the same great reward for praying at home.

To add to the importance of acting upon the prohibition issued in the Hadith, it is interesting to note that the wife of Umar ibn al-Khattab (the second Caliph) would go to the mosque despite Umar showing his dislike for this.

She is reported to discuss this with another companion of the Prophet (PBUH), in which she asks the companion whether she understood why Umar would not prevent her from going to the mosque. The other companion responds by saying, because of the statement of Allah’s Messenger:

Denying a woman from the mosque undermines a woman’s ability to make righteous decisions, absurdly indicating that the community needs to make the righteous decisions for them. As though women can’t be trusted to make the pious choice. The reality that women are servants of Allah and have their own relationships with Allah is completely disregarded.

To summarise; if a woman does not heed the recommendation of the first Hadith, it has nothing to do with anyone whatsoever apart from her and God. If a man does not respond to the command of the second Hadith, it becomes the responsibility of everyone in the Muslim community to raise this issue respectfully and ensure that Muslim women are given their rights.

And as Julie said: “We just want to pray!”