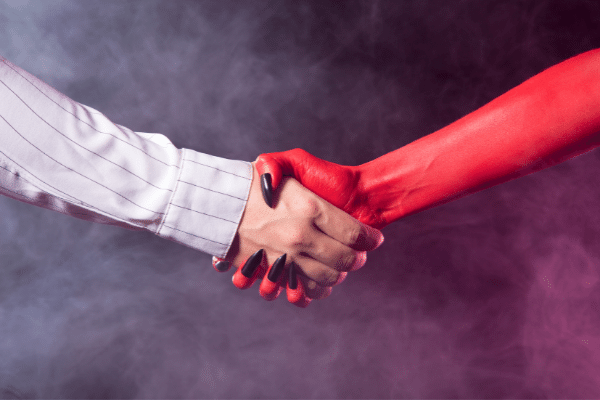 Satan is a jinn who was assigned the role of teaching Angels, he is made of fire (a form of energy) and God has given him certain capabilities and devices that allow him to do some quite powerful things. The above verses hint to Satan’s power to deceive people by making evil appear attractive and alluring with flowery language – like marketing language.

The Satan is described as ‘al-waswas al-khannas., the slinking whisperer – one who whispers wrong thoughts in a stealthy and sneaky manner – quietly laying his snare and trap to catch the unwary.

How Does Satan Mislead People?

Try to visualise Satan holding a conference in which he invites all his followers. What would be his message for them?

He would tell them: “As long as the Muslims continue to pray, give charity and love God (Subhanahu Wa Ta’ala) and Muhammad (salla Allahu alayhi wa sallam) you have no chance of misleading them. Therefore, in order to take them away from this love and devotion, I recommend you adopt the following strategy:

Finally Satan would say, “Do these nine things faithfully. I promise it will work!”

Satan Keeps Us Busy But Unsuccessful

Yes we are busy, sometimes very busy, but are we successful? There’s a big difference between being busy and successful – busy can often just be a result of being ‘under Satan’s yoke’! We should take care to reflect on what we spend our time on, so that we don’t get caught in this evil trap.

Here are some couplets from Rumi about the Devil:

Let us seek refuge with Allah from Satan.

Alas! We are perishing by his insolence.

The dog is one, yet he enters a thousand forms;

Whatever he enters straight becomes himself.

Whatever makes you shiver, know he is in it, –

The Devil is hidden beneath its outward form.

When he finds no form at hand, he enters your thoughts,

To cause them to draw you into sin.

From your thoughts proceeds destruction,

When from time to time evil thoughts occur to you.

Sometimes of gain and traffic,

Sometimes of merchandise and wealth.

Sometimes of money and wives and children,

Sometimes of wisdom or of sadness.

Sometimes of mills, gardens, and villas,

Sometimes of clouds and mists and jokes and jests.

Sometimes of peace and war,

Sometimes of honour and disgrace.

Ah! Cast out of your head these vain imaginations,

Ah! Sweep out of your heart these evil suggestions.

Cry, “There is no power nor strength but in God!”

To avert the Evil One from the world and your own soul.