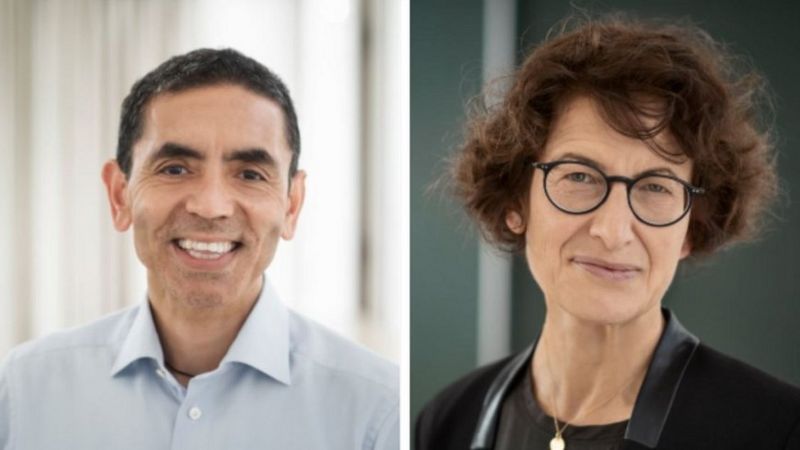 According to BBC, a Turkish-German husband-and-wife team have emerged as frontrunners in the race to market a vaccine against coronavirus, which would be an extraordinary achievement.

Turkish-born Ugur Sahin, 55, is CEO of German biotech firm BioNTech. He co-founded it with his wife and fellow board member Özlem Türeci, 53, and his former teacher, Prof Christoph Huber, an Austrian cancer expert.

What is the vaccine breakthrough?

BioNTech and its US partner Pfizer announced that their vaccine could prevent more than 90% of people from getting Covid-19, according to early results from Phase 3 trials.

It is among 11 vaccines that are currently in the final stages of testing worldwide, involving other, rival pharmaceutical firms and labs.

The world has never before seen such rapid progress towards vaccine development – normally the research and trials take seven or eight years. BioNTech’s Covid team was given the title “Project Lightspeed”.

How would it work?

Prof Sahin and Dr Türeci are immunotherapy specialists, whose efforts were previously focused on cancer patients: they used messenger RNA (mRNA) molecules to trigger the production of certain proteins in cells, which could then train the immune system to attack cancer cells.

The role of mRNA in sending genetic instructions to cells could, Prof Sahin realised, be adapted to the fight against coronavirus. The idea is to trick the immune system with viral proteins, so that antibodies can then attack the virus.

When news of the virulence of coronavirus was reported in January, based on data from the outbreak in Wuhan, China, BioNTech was already in a good position, as it had teamed up with Pfizer in 2018 to develop mRNA-based flu vaccines.

Who are the power couple?

Prof Sahin and Dr Türeci founded BioNTech in the western German city of Mainz in 2008.

Both are children of Turkish immigrants. Ugur Sahin was four when he moved to Germany with his mother to join his father, who was working at a Ford factory in Cologne.

Ugur Sahin studied medicine at the University of Cologne, and says he often stayed in the lab late into the evening, before cycling home. Today he still cycles to work.

“He never changed from being incredibly humble and personable,” said Matthias Kromayer of venture capital firm MIG AG, who invested in BioNTech right from the start.

Before the pandemic, BioNTech researched individualised cancer treatments based on the immune system, but so far none of its drugs has reached the approval stage.

Özlem Türeci grew up influenced by her father, who was a doctor – he had his practice at home. “I could not imagine any other profession even when I was a young girl,” she is quoted as saying.

CEO Prof Sahin, with an 18% stake, is now among the 10 richest Germans. His wife is the firm’s Chief Medical Officer.

They married in 2002, when Prof Sahin was working at the University Medical Centre Mainz. Even on their wedding day Prof Sahin spent some time in the lab, and today he continues to teach at the university.

They became biotech entrepreneurs in 2001, launching Ganymed Pharmaceuticals, to develop immunotherapy cancer drugs. They sold it in 2016 for €422m (£376m).

BioNTech employs more than 1,300 people from over 60 countries, more than half of them women, Deutsche Welle reports.

In January, after reading about coronavirus in The Lancet, Prof Sahin quickly realised how fast it was spreading, and after studying the data he dedicated more than 400 staff to developing a vaccine.

“The value of my stake doesn’t interest me,” he told German news website Wirtschaftswoche. “We wanted to build up a firm similar to biotech giants like Amgen or Genentech. We want to create long-term value. That’s what interests me.”