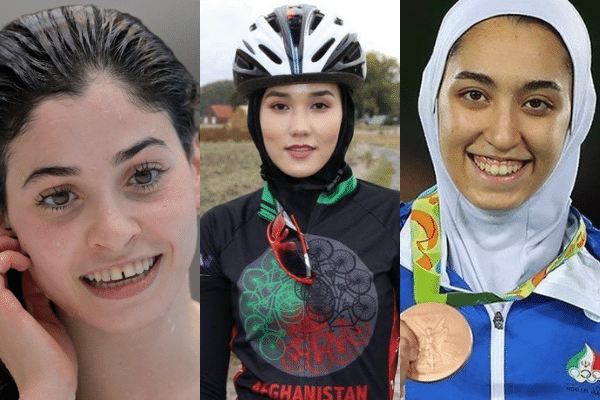 At every Olympics, Muslim women break barriers and make history in their own right by being selected for their country’s national team. Nawal El Moutawakel, the first Muslim woman to win a gold medal, did it in the women’s 400-meter hurdles event at the 1984 Summer Olympics in Los Angeles. She was the sole female athlete in Morocco’s delegation at the time. While much has changed since then, we clearly still have a long way to go until Muslim women participating in sports are more welcomed by their families and communities and given the required coaching to succeed.

Although there are a number of Muslim women competing in the Tokyo Olympics this year, I wanted to focus on the ladies in the Olympic Refugee Team, who have taken a totally different path to the Games. They have faced adversity and even risked their lives as a result of their participation in sports or the trip they travelled to escape limits and gain freedom. Yusra Mardini, Masomah Alizada, and Kimia Alizadeh Zonozi each have a story to tell.

Yusra is a 23-year-old Syrian woman who grew up in Damascus. She and her sister fled Syria in 2015 when their home was devastated in the civil war. She had to swim for her life and save the lives of other refugees during her trek. She was smuggled into Greece via an inflatable boat after fleeing through Lebanon and then Turkey. When the engine failed and the boat began to take on water, she and others who could swim dove into the ocean and towed the boat for nearly three hours. She made it to Germany after arriving on the Greek island of Lesbos. She had trained as a swimmer and had represented Syria in competitions before leaving Syria. She was able to continue her training in Germany and was selected as one of the first term athletes for the 2016 Olympic Refugee squad.

Masomah is a 25-year-old Afghani woman who grew up in Iran and began riding in high school. She returned to Afghanistan at the age of ten and continued to pursue her passion for riding, despite the Taliban’s prohibition on girls cycling. She later joined the Afghan national women’s cycling team, together with her sister. She was frequently abused and threatened, including being pelted with fruit and stones. After participating in the TV documentary ‘Les Petites Reines de Kaboul’ (‘The Little Queens of Kabul’), she fled to France with her family in 2017. Despite the dangers and hostility, the cycling team continued to train. Masomah and her family were able to come to France on a humanitarian visa and were granted asylum.

Kimia is 23 years old and was born and raised in Iran. She made history for Iran in 2016 when she won a bronze medal in the Taekwondo 57kg weight class at the Rio de Janeiro Olympics. She became the first Iranian woman to win a medal at Summer Olympics. However, in 2020, she decided she no longer wanted to serve her own nation and fled since she felt oppressed and had no control over her life as a woman in Iran. She shocked the world when she defeated World No. 1 Great Britain’s Jade Jones in the first round of the 2020 Tokyo Olympics, where she was aiming for a record third gold medal. Despite her incredible victory, Kimia came up just short of a bronze medal.