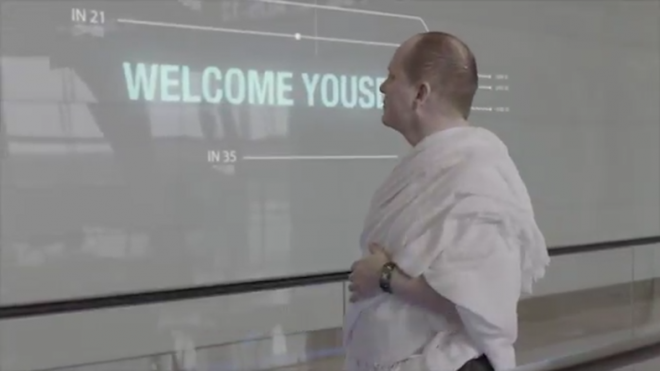 Before we clicked a button to book rooms and flights, Hajj was a far more perilous trial. Pilgrims often fell ill or were robbed on the way from their homes en route to Mecca. Some even become destitute on the path to redemption. Hajj is known as a physically tough and emotionally testing journey. Until now.

Does Hajj have to be hard?

In fitting with modernities call for convenience at all times, the Saudi government is pledging to make Hajj as streamlined and as painless as possible by 2029. Yet, the ad showing the wonders of ‘Hajj 2029’ released by The Ministry of Hajj and Umrah, is one of the most disturbing clips, since the original trailer for The Matrix.

Advanced technological tools will be launched in that year to make the Islamic pilgrimage easier and more accessible to everyone. The video shows how every registered pilgrim will receive a package before their trip that will include a badge, an earpiece and an electronic watch, which they must have on them at all times.

Still, hey-ho, the badge allows pilgrims to pass through an e-gate instead of customs at the airport. You can board a train that will transport you to where you need to go. Plus, the same badge will grant you access to your hotel room, without having to check in at all.

The arguments for greater tech are usually three-fold ‘speed, convenience and cost.’ All of these elements were variously billed as reasons that this year’s Hajj became the first time western Muslims could no longer book with their local mosque group or regional tour operator. The Saudi Ministries set up a lottery system which would end the litany of complaints about unethical operators and scams.

The funnelling of bookings into a few companies’ hands would offer a fluid, clear understanding package system all underpinned by advances in technology. Unfortunately, that has not been the case. The misery suffered by thousands of pilgrims is currently leaking out from the Haramain via a rather standard tech system – social media.

It seems inevitable more complaints and calls for refunds will come to light in the coming weeks. My personal reservations about the crowbarring of tech security into the Hajj experience has as much to do with the impact on the pilgrim in our religious duties as it has to do with over-reliance on cyber registration.

Is there a Quranic Ayah or Hadith or a quote from a classical Islamic scholar which recommends zero hardship on the path to taqwa as an aspired state? What then of the Companions who were said to have arrows in them yet completed their salah?

As we are told that the aspiration for Hajj should be as much ease as possible, it is worth remembering that The Messenger of Allah صلى الله عليه وسلم made his pilgrimage riding on an aged and worn saddle, placed over a rug worth less than four dirhams.

Abdullah ibn Zayd reported: The Prophet, peace and blessings be upon him, said,

The namesake of our Major Pilgrimage was the mother of Ismael AS. Hajjar, the wife of Prophet Ibrahim AS, was left alone in the desert of Bacca (today’s Mecca), where she ran up and down mountains trying to seek emergency help for herself and her son. Exhausting even when surrounded by others and with water well within reach, today, millions of pilgrims continue to run between Safa and Marwa, honouring her challenge.

Speed and convenience are not searched for elements on the spiritual path. The believer who seeks comfort over inspiration may be granted this from Allah – as a limited blessing, or even a closing of access to a higher station of taqwa.

I was offered a 5-star Hajj by generous Gulf benefactors whose aides assured me that accepting would mean ‘you won’t have to be with other Muslims and everything will be made easy for you.’ I turned the offer down, not understanding at the time that Hajj is an invitation from Allah not conferred upon everyone.

It is an honour that may not be extended twice. The week before Hajj started I received a humbler invitation to go with a convert group which would be ‘basic’. I thankfully accepted. Miraculously my paperwork was completed in a single morning at the Saudi embassy in London and a flight paid for by a sister I had never even met, by Allah’s grace.

Like many, I have memories of the utter chaos at Jeddah airport, similar only to that of the Rafah crossing from Gaza into Egypt. Families sat on the floor, seemingly preparing to spend the night. Names called from different directions. An official approached me, looking at his name sheet. ‘You English?’ He asked. When I said yes, without checking my name, he herded me onto a random bus.

I ended up being driven miles from Mecca with a group that was not the one I was booked to meet. The kind fellow Hajjis found me a room at their hostel for 48 hours. ‘Qadr Allah’ we smiled, as my convert comrades were finally tracked down and I headed to the actual hotel I was booked into.

It wasn’t a ‘mistake’ – it was my personal Hajj experience. Specifically crafted for me by Allah ta’ala. Humbling, confusing, sweaty and tiring. All reminders that things go wrong, this path is one of effort and upon Allah alone can we place our trust.

One afternoon, I was making tawaf in the heat and noticed an elderly lady in a wheelchair. I took a break in my circuit to share some dates and water. She was from Afghanistan. Just hearing the place named in the shade of the Holy Kaaba – thinking of the decades of war and loss, we both began sobbingly to make supplications for His Mercy. Tears soaked my abaya they just wouldn’t stop. ‘Ya Allah Afghanistan, Ya Allah the Ummah’ we called out over and over.

The future high-tech Hajj will include an earpiece and e-watch providing pilgrims with all the necessary information we could need – in any language. It notifies pilgrims when they complete a tawaaf, and when to recite prayers. Perhaps, had I been wearing an earpiece directing me at every moment where to be and what to say, I would not have noticed the lady in the wheelchair, much less disobeyed the Bluetooth orders to complete my tawaf or ‘quest’ as sections are called. Sharing water and dates with a stranger, crying instead of obediently walking in a timed manner, breaking a new protocol.

Hajj is a private pilgrimage made with the public. The universal chant ‘labaikallah humma labaik’ and our interactions with each other, however, make it a group experience. I can’t help wondering how the new lottery system will also do away with the blessing of a shared
experience.

If you don’t know until the last minute if you are going, will you be likely to invest in classes to learn about the rites? These include memorisation of Quranic verses and specific dua’s. Why bother learning them, when a ping from a watch on your wrist will tell you what and when to recite. Good bye pesky memorisation!

The Saudi advert for Hajj 2029 talks of sections of the Hajj as ‘Quests.’ When I first heard this I thought it was simply a translation mistake.

My university-aged daughter heard it and understood the intention right away. Pilgrims in the West are often younger than those in the rest of the Muslim world. The number of British Muslims performing Hajj each year rose from 759 in 1968 to around 25,000 by the mid-2000s.

They will understand that a quest, or a mission, is a task in video games that a player-controlled character, party, or group of characters may complete in order to gain a reward.

‘They are making Hajj into a giant real-time game,’ my daughter said. Al-Hasan al-Basri once stood at. ‘Arafat in the sun on an extremely hot day. He was asked: “Why do you not move into the shade?” He replied: “I did not realise I was in the sun. I recalled a sin that I had committed and I did not feel the heat of the sun.”

It was so hot that had someone wrung out his clothes, it is said that sweat would have poured from them. In the past, such stories inspired us. They showed Muslims the greatness of the pious to guide us to greater acts of sincerity in our ibadah.

In Hajj 2029, Sheikh Al-Basri would be criticised by authorities for either having lost his watch or for not wearing an earpiece correctly.

Lauren Booth is a highly sought-after writer, influencer and media trainer. Her one-woman stage play ‘Accidentally Muslim’ received acclaim at the world’s largest Arts fair, The Edinburgh Fringe Festival. She hosts a series on her youtube channel and her best-selling audiobook, In Search of a Holy Land, can be purchased here.