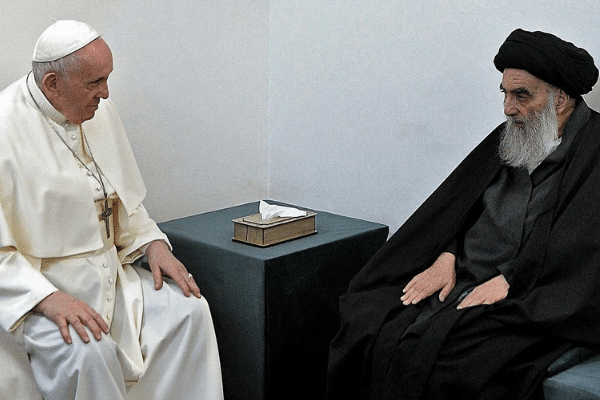 On the 5th of March 2021, the Pope went to Najaf in Iraq where he visited Grand Ayatollah Ali al-Sistani, the spiritual leader of Iraq’s Shia community. The Pope’s visit to Iraq offers moral support to Iraq’s beleaguered Christian community, it will encourage the Iraqi leadership to make an effort in protecting them. Religious leaders must play their part and in this sense Pope Francis’s visit to Iraq is a significant undertaking for promoting interfaith harmony.

I believe that this meeting of two spiritual leaders bodes well for us too. How do we tackle the media-generated perception that Muslims are a threat to UK security and the Muslim extremists’ assertion the British government is Islamophobic? The two camps are creating anxieties and fuelling a ‘clash of civilisations.’ A mutual demonisation is creating mutual fear and hatred. This situation is untenable. Our two faiths Islam and Christianity do not accept such attitude and behaviour towards neighbours. That is why this meeting of the Pope and the Ayatollah is significant.

The Messenger (SAW) described humanity as “God’s family” and taking care of His family is recommended as a successful policy to please Him. The Majestic Quran is an educator that emphasises respect for humanity:

For a Muslim interfaith dialogue is natural, not a diplomatic exercise of exchanging smiles. It promotes peace and security based on a genuine desire to know the other.

Archbishop Rowan Williams said, “Christians are Christians and Muslims are Muslims because they care about the truth and because they believe that truth alone gives life. About the nature of that absolute and life-giving truth, Christians and Muslims are not fully in agreement. Yet they can find words in which to explain and to explore that disagreement because they also share histories and practices that make parts of their systems of belief mutually recognisable, a story reaching back to God’s creation of the world and God’s call to Abraham” (Scriptures in Dialogue, Churchill House Publishing).

Professor Ismail Faruqi said “Islam and Christianity hold that God is transcendent and eternal; He created the universe; He created man and placed him on earth to fulfil His will; the content of Divine will for man is faith and moral law. Both religions hold man’s fulfilment of the Divine will to be universal” (Islam and other faiths By A. Siddiqui).

When I was the chair of the Christian Muslim Forum (2008-2010) we followed these rules:

We conclude that engagement through the Quranic principles of; equality, mutual understanding, cooperation and friendship is the way forward for peace.

Should we celebrate the Prophet’s ﷺ birthday?