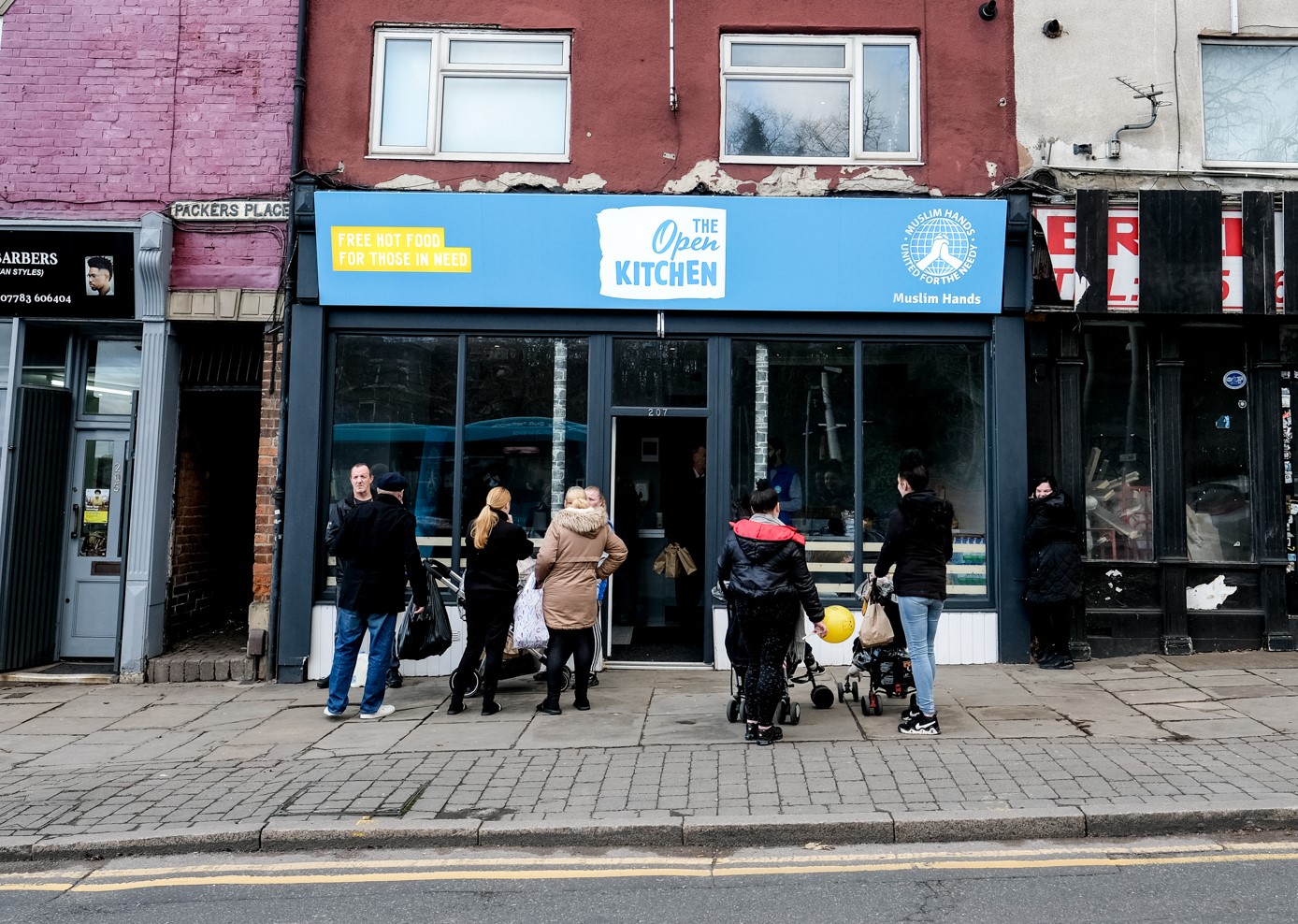 The Nottingham Open Kitchen, which is situated on Mansfield Rd, has provided thousands of hot nutritious meals since its opening in December, and is the second community kitchen to be set up by UK charity Muslim Hands.

Driven by the Islamic values of serving humanity, with a specific focus on feeding one’s neighbours, the Open Kitchen is working with the Nottingham community to ensure that the meals are accessible to anyone in need, including those facing homelessness and low-income families, seven days a week.

Nottingham has been described as one of the most deprived cities in England with one in six children living below the poverty line according to the Office of National Statistics. Now, rising inflation will cause further suffering. According to the House of Commons, the increasing cost of living will impact low-income families the most as they spend a large proportion of their income on energy and food which have seen some of the steepest price hikes.

Shockingly, seven million people are struggling to afford to eat in the UK. Sally, an Open Kitchen service user said,

‘The Open Kitchen is very helpful and has gone a long way in supporting me. I am sleeping on my sister’s sofa with no job. Things were really bad before, but at least I now have food daily.’

‘I am living alone and between jobs. This place helps me a lot and I get to eat food in the day. I have no heating at the moment so the fleece they gave me will keep me warm.’

With Ramadan and Easter coinciding at a time of extreme inflation described as ‘Awful April’ and the Ukraine conflict resulting in the largest mass movement of refugees since World War Two, faith-based organisations will have to work harder than ever to support those in need.

This Ramadan, the Open Kitchen Nottingham will be providing 1000 iftar meals to students from Nottingham Trent University who are far from home and their loved ones.

‘We are looking forward to working with the Open Kitchen during Ramadan to provide meals for students who will be spending Ramadan away from home. Ramadan at its core is about togetherness and community and the students that we will be supporting may feel isolated being in new surroundings or struggling with funds. Partnering with Muslim Hands is a great way to bring different communities together and share a meal with those that are in the same boat.’

These meals have allowed Muslim hands to connect with a range of Nottingham community groups working tirelessly to tackle food poverty, and through these partnerships they have supported women’s shelters, refugee centres and religious institutions, including the Nottingham Liberal Synagogue, who started the Salaam Shalom Kitchen initiative.

‘There are many people in Nottingham that are finding it difficult to feed themselves and their families. Faith based charities like Muslim Hands and Salaam Shalom Kitchen are stepping up and providing a vital and important service. Through Muslims and Jews working together, we symbolise hope and cooperation, that uniting to support those in need is for the greater good. In the Jewish faith giving charity, acts of loving service and repairing the world are fundamental and we are grateful to be in a fortunate position to give back to our diverse community.’

‘The Open Kitchen is testament to our Islamic faith, where we are reminded of the teachings of the Prophet Muhammad (saw), that he is not a believer whose stomach is filled while his neighbour goes hungry. The service users that walk through the doors symbolise diversity and social cohesion and make up people from all faiths, backgrounds and walks of life. We are proud of this seed of hope that we have planted in the heart of Nottingham and we owe much to our dedicated supporters that continue to nurture and help it grow, despite the difficulties they are facing themselves in these uncertain times.’