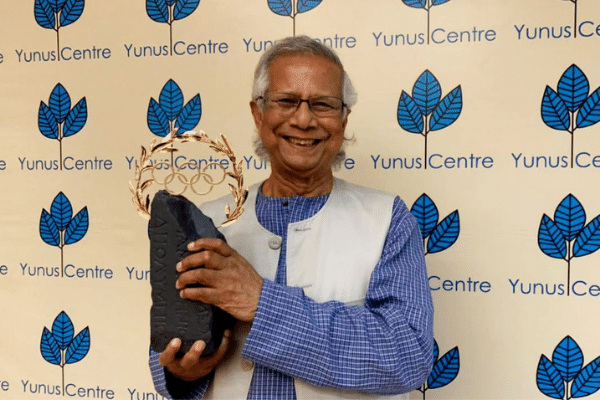 Muhammad Yunus, a Nobel Peace Prize winner and entrepreneur, received the Olympic Laurel during the Opening Ceremony of the Tokyo Olympic Games 2020 in Japan.

It is the International Olympic Committee’s highest distinction, and the lone Bangladeshi Nobel Laureate is only the second person to receive it in the Games’ history.

Yunus said the award was “so special” for him. “I am honoured and overwhelmed to receive this Olympic Laurel. And so sad I can’t be there with you,” he said.

He praised the IOC for taking the social aspect of sports seriously and encouraged athletes all over the world to “provide the leadership in transforming this world.”

He praised the athletes for their contributions to achieving a “world of three zeros” – zero net carbon emissions, zero wealth concentration to eradicate poverty, and zero unemployment by empowering everyone to become entrepreneurs.

Yunus wished the IOC success in its quest to use sport to help convert the world into a more peaceful place.

Yunus received the prize for his considerable work in sport for development, which includes developing the Yunus Sports Hub, a global social enterprise network that uses sport to tackle issues.

He has worked with the IOC on a number of programmes, including educational components of the IOC Young Leaders Programme, the “Imagine” Peace Youth Camp, and the Athlete365 Business Accelerator, the first comprehensive business programme for Olympians transitioning careers.

Yunus, a Bangladeshi banker who received the Nobel Peace Prize in 2006 for pioneering microcredit loans to the poor, has collaborated with the International Olympic Committee on a business programme for athletes.