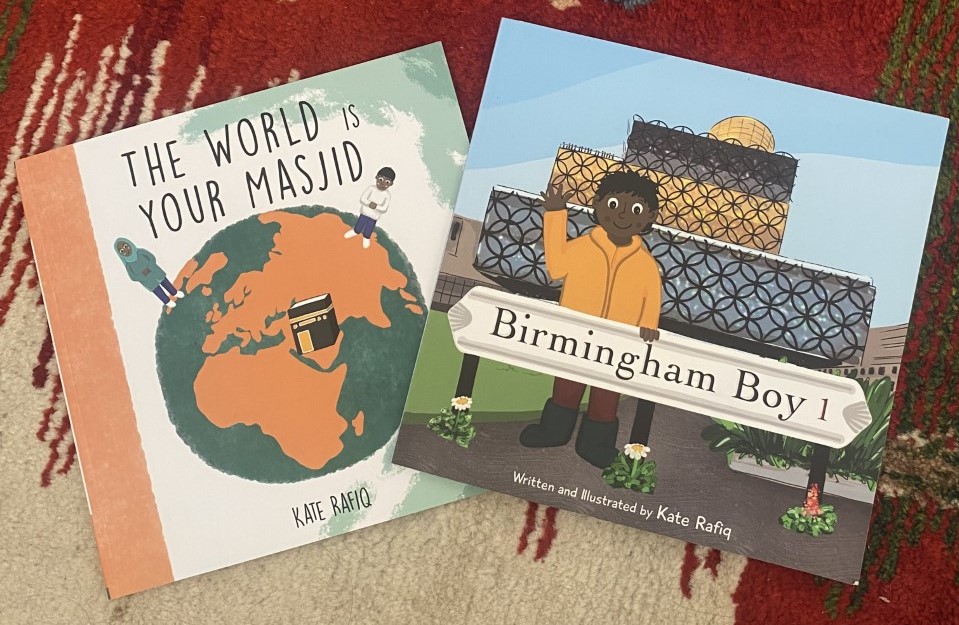 We caught up with Kate Rafiq, a triple threat who writes, illustrates and runs her own publishing company, Dune Books. Whilst Kate is still getting started in the industry, we spoke to her about her published books, Birmingham Boy and The World is your Masjid, and all she has achieved so far.

What inspired you to begin writing?

“I have always loved writing, mainly poetry and art. When my daughter was born, I started looking for books for her.

“There were lots of books, but I didn’t feel like there was anything that really would have been very exciting for my daughter to read or perhaps even reflect her.

“The Islamic-themed books that were around were quite heavy in regards to the Quran and stories of the Prophets. Whilst these are important lessons, I just felt it needed to be more fun.

“As time went on I did write a few stories, but publishers would always say ‘it’s a nice story, it’s just not for us.’ It got a bit demoralising, really, and I stopped writing for a while.“

Despite the knockbacks, Kate didn’t let that stop her, as she eventually went on to self-publish her first book, Birmingham Boy.

The story follows a south Asian boy as he goes about his day living in Birmingham. It’s a great book for kids navigating their fusion identity. The emerging British Muslim generation is navigating a different identity to that of our parents. At the same time, we’re also trying to maintain certain cultural practises, as well as balancing our Muslim identity in Western society.

I liked how Kate made Birmingham a focal point as the boy’s home, mixed in with the cultural aspects of heritage. It cemented that whilst this young boy was from Birmingham, he also represented an amalgamation of other cultural practises that were passed down.

How did Birmingham Boy come about?

“My youngest son gave me the inspiration for Birmingham Boy. I wanted something that he could really see himself in. Whilst there are more books that represent Asian children nowadays, it’s still a small percentage of the whole children’s book market.

“Whilst it’s focusing on a kid from Birmingham, it does apply to most kids around the country, if not the world. Why shouldn’t there be a book about a little Asian boy from Birmingham?

“I thought maybe because Birmingham Boy is so niche, no publisher would want to publish that. When you send your book off to a publishing house, it sits there for weeks, and somebody can open your book, reads the first line and think, ‘it’s not for me’. To put all the work in to have it shut down by the first couple of lines by someone who was probably never your target audience isn’t great.

“Because of this, I thought I’d do it myself. I knew nothing about publishing, but I just thought, how hard can it be? I’ve written it and I’ve done the illustrations. There was some technical stuff that I couldn’t really get my head around to start with. But I guess I’m a bit of a control freak, so it’s allowed me to figure things out.

“ I thought I’ll do one book and that will be it. But I kind of got the bug for it.”

The World is your Masjid

The World is your Masjid is Kate’s second book, which teaches kids where they can and can’t pray in a fun and informative way.

Kate tells us how the books are doing.

“They’re both doing well. The first run of the world is your Masjid sold out really quickly. I’m close to selling out of Birmingham boy too.

“The best part about doing it all myself is that anything that comes back now makes me feel like it’s been worth it. The World is your Masjid is now in a few shops in America, Canada, New Zealand and the Maldives.

“Even Birmingham boy has actually managed to get to Birmingham, Alabama. It’s been a really positive thing and if I could do it all day long, I would.“

You have to be dedicated, you have to believe in what you’re doing, and try and see it through.

This is all a long process, and I knew it was going to be, but it’s so rewarding and so enjoyable. It feels like it’s not work to be honest. I’m grateful that I can do this.

If I can do this, I really do think anyone can. It’s really possible for anyone to do anything that they put their mind to.

How do you find time with 4 children to illustrate?

I get up really early in the morning before everyone else is up. That’s the time when I do my illustrating because I can focus on it. It is a struggle, but it’s worth it.

What is next for you?

I’m working on my third book now which is about the refugee journey, which is something I’m passionate about. I’m constantly aware that this is not my own story. I’m not a refugee. I’ve never been a refugee. I have this internal battle that somebody else should be doing it.

In that same breath, if authors only write about what they know, then we wouldn’t have half the books that we have. As a human and as a Muslim, I just think, what can I do? Okay, well, I write, I illustrate, I’ve got a publishing house. This book just kind of came to me. I felt like if this can just add to the discussion it’ll be a positive thing.

There will never be enough books to encourage white British children to try to understand that there are children around the world that are not as fortunate as them.

If we can build empathy from that age up, I’m hoping that as they become adults, we’ll see less of the horror stories we’re seeing on a daily basis.

Kate Rafiq is a British revert to Islam. Whilst she’s always had a creative spark, her children are what motivated her to create children’s stories that are more representative of different cultures & ethnicities. She grew tired of the bias in the publishing industry and as a result, created her own publishing company, Dune Books. She also does all the illustration and writing in her stories.