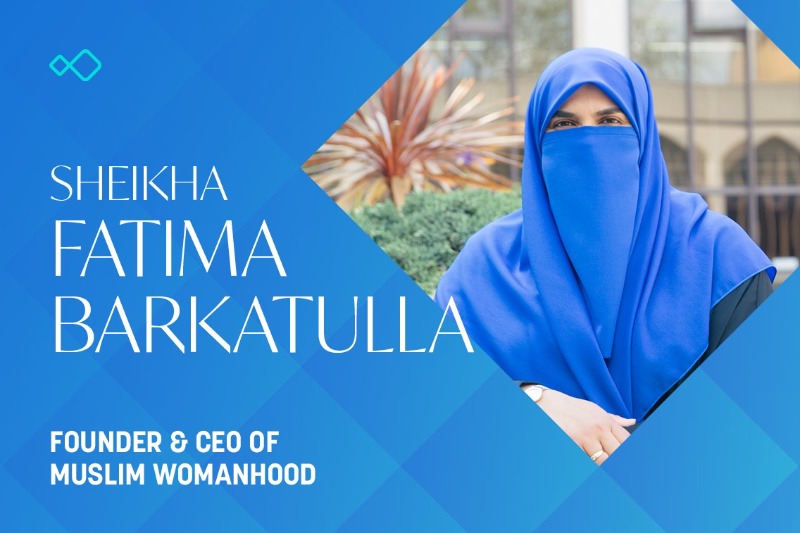 Muslim Women are a pivotal part of keeping the faith and values of Islam alive. Yet despite this, why do so many women feel fragmented from their community?

“Women are half the deen and they give birth to the other half. So why is it that women are neglected as much as they are?”

We spoke to Fatima Barkatulla, Author, Alimah and founder of the Muslim Womanhood Network, about the need for a space of belonging for Muslim women.

“There is a desire and need for a space where women can address their motivation, resilience and spiritual needs. When I look around in Europe, I couldn’t see any prominent women’s organisations. I was meeting so many sisters across the country who were doing great work in their own communities, but there was no place for us all to be, to network or to meet annually, and I feel like that would be very beneficial.“

“From the events I could see, it wasn’t very clear who was in charge, where they were leading women, or how exactly they were serving women. For example, I attended some conferences about fashion and food, which is nice, but materialistic. On the other hand, there were events run for women that were organised by men with hardly any input from sisters, except that they were volunteers.”

Fatima has a vision; to connect women in England & strengthen their Islamic values. Whilst there are so many organisations doing great work for local communities, one big hub where woman can connect, strengthen and uplift each other in regard to faith seems amiss, attested by the market research Fatima conducted.

What were your motivations behind creating the organisation?

“For me, this organisation did start with the desire to launch a conference; a big event, with inspiring lectures and a day out that would change people’s lives.

“A few years back, I used to help run a conference for Muslim women called Seeds of Change. It was very popular, however, due to a change in strategy it couldn’t run any longer. I started to think that there’s nothing really addressing sisters. I think that a collaborative connection with women doesn’t really exist. It’s more superficial celebrations, like food festivals, which are great, but we need something deeper.“

“We found that women really want spaces where sisterhood can thrive.”

“Muslims have been through a lot in the West, and they need to be unified as much as possible upon the truth and not upon falsehood. At the same time, I feel like, a lot of people are just doing their best. We’ve got to get everyone together and try to bring everyone to areas of consensus. Alhamdullilah, my dad is a scholar, and he really taught me from a young age that Islam has had the answers to a lot of the problems of this society.

“In the past, we did a woman’s only event where Muslim women had to invite a non-Muslim. It was a dinner event to tell them about what Islam teaches. The woman who was hosting wasn’t wearing hijab, and she showed some images of niqabi’s on the screen and asked “when you look at this picture, what do you think?” It got the women talking and thinking and feeling safe in that environment. After that, she would reveal that the picture on the screen is actually her in her niqab.

“It was a quick way to get them to think that, hang on a minute, there’s a whole world here that I don’t know about. It would remove presumptions about Muslim women, and introduce Islam to them. Can you imagine if we had events like that on a bigger scale?

What are your plans for the Muslim Womanhood organisation?

“I thought that the best vehicle to organise a conference would be under an organisation because it could accommodate multiple types of projects. I feel like we’ve got a number of initiatives that we’ve planned & have the potential of launching.”

“Our vision is for every woman holding firm & confidently to the rope of Allah.”

“We want to help women with the struggles of being a Muslim in the West, especially in the 21st century, help them to stay strong, stay motivated, and get educated about Islam.

“We don’t want Muslim women to fall prey to other ideologies, and the pressures of various industries that seem to focus on women, like the fashion industry, makeup and music industry, media and politicians.

“There is a big pressure on Muslim women to change their Deen to adopt mainstream narratives on life. I think in the absence of an alternative voice it’s very easy to adopt what sounds good. We want to provide the counter-narrative. I wanted to use large annual events as the main vehicle to do that.

“We have a moral obligation as women to prevent society from degenerating, and a moral obligation to share the message of Islam with people. We actually care about our sisters, and we just want them to be correctly informed and not be stagnant in terms of the Islamic progress and not go backwards.

“The ultimate aim is to show that there’s an alternative vision for womanhood, an alternative way of being a human in this world, to what to what society has indoctrinated everyone into.“

How you can support the Muslim Womanhood

You can follow along with the organisation on social media, and can keep up to date with news of the campaign here. Currently Fatima is fundraising for £16,000, and she is so close to reaching her target to kickstart the launch of the organisation. By donating, you can help her take one step closer to building this vision into a reality for Muslim Women in the UK.