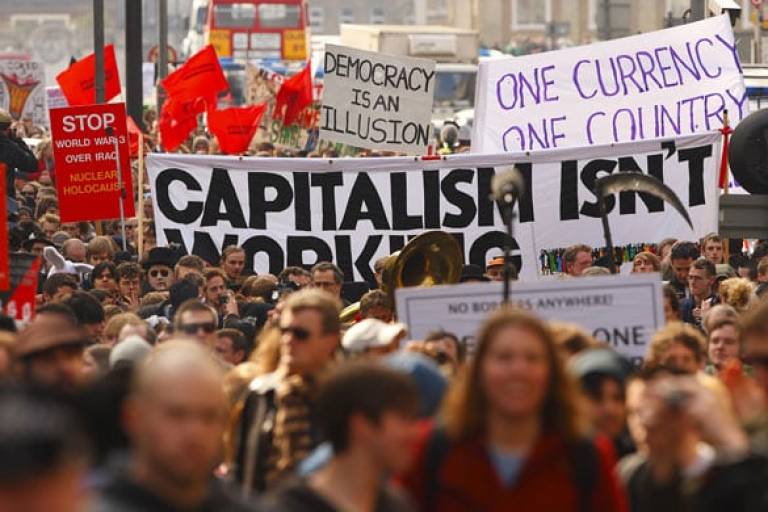 Living under a capitalistic regime means everything is susceptible to commodification, including Islam. Reducing Islam down to a brand and the Muslim to a consumer is something that has happened as a result of our society’s structure. Let’s delve into how this has been made possible.

Capitalism uses big data to penetrate the consciousness of Muslims. This allows the global data machine to peer into the very consciousness, soul, and psyche of the Muslim.

As Hans explains, “This knowledge is knowledge for the sake of domination and control (Herrschaftswissen): it facilitates intervention in the psyche and enables influence to take place on a pre-reflexive level.”

Nowhere is this more evident than in the emergent marketing strategies that target Muslims. Marketing corporations such as Ogilvy & Mather have created entire divisions like Ogilvy Noor to attract and engage with Muslim consumers.

The second phase in subverting the ummah is through the creation of a new neoliberal subjectivity.

In the absence of critical consciousness, the Muslim subject finds itself operating in spaces that are not of its own making and under the illusion that it is free.

Power has reached its zenith in the age of capitalism because it now operates through different registers: it assumes permissive forms. Instead of being a force of violence that subdues the will and freedom through force, it’s a soft power that exploits positive feelings.

To illustrate, consider how many young Muslims are increasingly seeking representation in these spaces: the right to consume, produce, and compete become the primary marker of freedom. Consider the complaint of Shelina Janmohamed, author of Generation M:

That is how capitalism operates: it manages the threshold of dissent. The neoliberal Muslim does not question power but seeks out an illusory distribution of power leaving its structures intact at the level of consciousness and strategy.

In that process, the Muslim subject loses itself in the name of “representation” and “visibility,” unaware that it has rendered itself invisible. These are spaces that seduce us into fabricating ‘dilemmas’ such as the burkini or the representation of Muslim fashion models.

The third phase in rendering the ummah impotent is through the erosion of the Muslim self.

Through psychopolitics as (1) the creation of new subjectivities and the (2) creation of spaces neoliberalism erodes the boundaries that demarcate the self from the other.

The relationships that bound the living organism are slowly displaced by new relations of consumption and competition. The emergence of “Generation M” is, par excellence, the marketized and branded face of formless Muslimness.

The erosion of Islamicity results in a blurring of the boundaries that demarcate the ummah from its environment; the Islamic from the non-Islamic, the self from the other.

Carl Schmitt warns that the blurring of these boundaries amounts to ceasing to exist in any significant sense. The community, when it “no longer possesses the capacity or the will to make this distinction, it ceases to exist politically [and religiously] …

In the absence of demarcating boundaries and its own self-image, the ummah cannot translate its energy into power. The ummah “is behaving like a beheaded body that still retains its physical energies but no longer possesses the ability to steer them in a reasonable direction.”

Energy is dispersed and confined to the spaces of production, consumption, and competition. The current crisis of the ummah can be defined as one of impotence wrought by the absence of defining boundaries that define the self which in turn results in a state of disarray.

To see the original publishing of this article, see Ali’s twitter below.