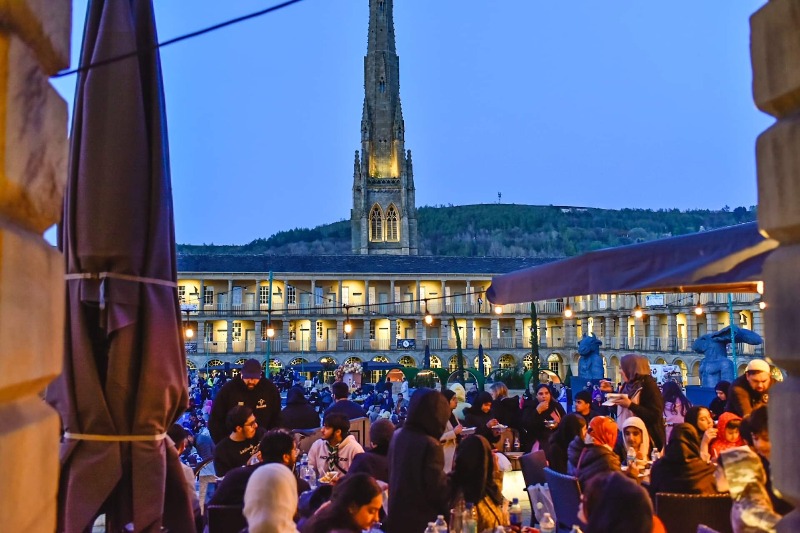 In the last week of Ramadan, the 51st Pellon Scout Group in West Yorkshire launched their first Iftaar event at the iconic Piece Hall.

I am Chair of The 51st Pellon Scout Group and organised the event at the historic building. The main purpose of the event was to invite members of our local community during this important time of the year and share our iftaar meal with them.

At a time when the world is divided over many issues affecting the global community, we felt it was important to bring together, in true scouting tradition, members of our local community to improve understanding and relationships between people of diverse backgrounds.

It is also our tenth anniversary year, so we used this event as an opportunity to showcase our amazing children and raise the profile of scouting in Muslim communities.

Iftaar under the stars is not new, but the setting of Piece Hall was absolutely magical as is evident from the photos.

People came from across Yorkshire to attend the event, which was the first of its kind in Piece Hall’s history.

For the first time since the Piece Hall was built in 1779, the Adhaan was heard across the courtyard followed by congregational prayers, led by Shaykh Abdullah Sawadogo Tijani from Burkina Faso.

As well as food being shared, the gathering had many activities on offer, including a climbing wall, soft archery and a performance by the Scouts of ‘Lab Pe Aati Hai’, the immortal words penned by Allama Muhammad Iqbal.

Zaheer paid tribute to the hard work and commitment of all the Leaders, who organised the event within three weeks. “We have already commenced planning for next years event, which will be bigger and better inshallah!”

Who are the 51st Pellon Scout Group?

51st Pellon Scout Group was formed in 2012. The Group is a member of the Muslim Scout Fellowship and has been delivering the official UK Scout Association programme for the last 10 years. The majority of the children in the group are from the Park Ward area, an area of high deprivation, with South Asians of Pakistani heritage being the main ethnic group. The community is well established and has a Muslim population of over 20,000.  The Group is oversubscribed at the moment, with a long waiting list in place. The Executive Committee is looking at ways to increase the capacity of the Group by recruiting additional leaders.

The programme offers young children an opportunity to develop life skills, enabling them to make positive contributions to society. Much of the focus is on the outdoors, enabling young children to have a connection to nature. Currently, there are around 70 children that regularly attend the weekly sessions.

You can read more about the group here.