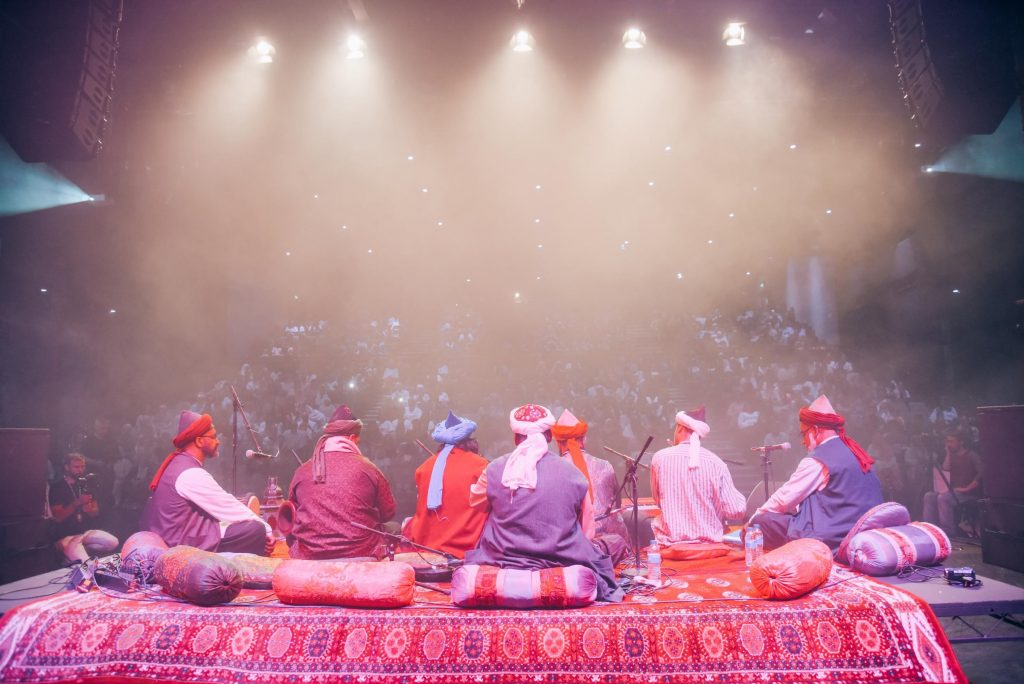 The Sufi festival, which began in 2019, celebrates Sufism and aims to educate and inspire both Muslims and non-Muslims.

The two-day festival took place this July in Glasgow for the second year ever, after having a two-year hiatus due to covid. Despite this gap, this didn’t hinder the numbers as attendees doubled this year.

They had an action-packed weekend full of poetry, theatre, arts and craft, storytelling and ceremonies of devotion. They also had academic talks from Sufi scholars and ran an educational conference.

Tariq, the founder of the festival, talked to us about his motivations behind setting it up and what he hoped to achieve.

“Going back, I met my Sheikh in 2009, and realised the deeper meaning of what it means to be a Muslim. Sadly, my Sheikh passed away in 2017, but the connection doesn’t disappear in death as it’s something that lasts forever.

“I wanted to keep the Sufi tradition alive and continue my Sheikh’s mission to bring hearts and minds together and share the beauty of Islam.

“My interest in events and media led me to utilising my talents to create an event to bring this vision to life.

“I wanted to challenge the negative stereotypes of Islam, both in and out of the community. It was intended to give people the opportunity to explore Sufism in ways they never have.

Looking through a media lens, Sufism is something that is becoming more associated as its own ‘mystic’ spirituality as opposed to its Islamic roots. This strategic change is visible everywhere, but one example can be seen when we look at the famous Sufi poet, Jalaluddin Rumi. The majority of posts and articles I came across involving him described him as a ‘mystic Sufi poet.’

An article in the New York Times describes it as such: ‘Rumi is often described as the best-selling poet in the United States. He is typically referred to as a mystic, a saint, a Sufi, or an enlightened man. Curiously, however, although he was a lifelong scholar of the Koran and Islam, he is less frequently described as a Muslim‘ [i].

Tariq wanted to abolish the mystery behind Sufism and give everyone the opportunity to see it through an authentic lens.

“One key factor to me was keeping everything as authentic as possible. Everyone at the festival has authentic Sufi ties. This was really important to make sure that everything done was impactful.

“I also wanted to promote creative arts within the Muslim community and beyond. Arts are beneficial to our spiritual and mental health and can have quite a healing impact. It gives people a chance to explore their spiritual growth in ways they may not have ever considered.

“The festival isn’t just about entertainment; it’s also about educating people. I want it to enlighten the minds of everyone and break down stigmas and preconceived notions of Sufism”.

Tariq and his team did an amazing job engaging not only the Muslim community but communities beyond that too. It can be something quite difficult to knack to bring different people together to celebrate Islam and explore their own spirituality with no judgement, however, the Muslim/non-Muslim split was about 60/40%, indicating it was a success.

The Sufi festival is for everyone and is something that will become key to building bridges and restoring respect and trust within different communities.

It’s healing for different communities to be able to come together and celebrate and learn about Islam with no judgement. This was evident in the stats, as Tariq stated the Muslim/non-Muslim split to be about 60/40%.

An attendee of the Sufi festival gives her perspective of the weekend.

“What stood out to me was the diversity of the audience. It was interfaith, there were young and old people, people had travelled from different parts of the UK. There was diversity in languages too, English, Arabic, Urdu. It really catered for everyone.

“In front of me was a Sikh family. They were enjoying and were visibly engaged by clapping and moving. It struck me that they were enjoying it. The conference was unapologetically Islamic but everyone was embracing it.

“During Qawwali night, the last performance was during maghrib. They paused the programme, and everyone prayed maghrib together. The expression of faith and collective prayer for people to experience who were outside the Islamic faith was nice and authentic. Some else said it was the best moment for them.

“Sufism is an inward journey, yet seeing it discussed and celebrated on a public platform was really nice to see. In a time where Islamaphobia is ripe, we need to bring people together, which is why we need things like this.

“There was something for everyone to relate to at the festival, which highlighted the spectrum of Muslims that are out there and how each of them are going through an inward journey.“

Check out the 2019 festival highlights above.