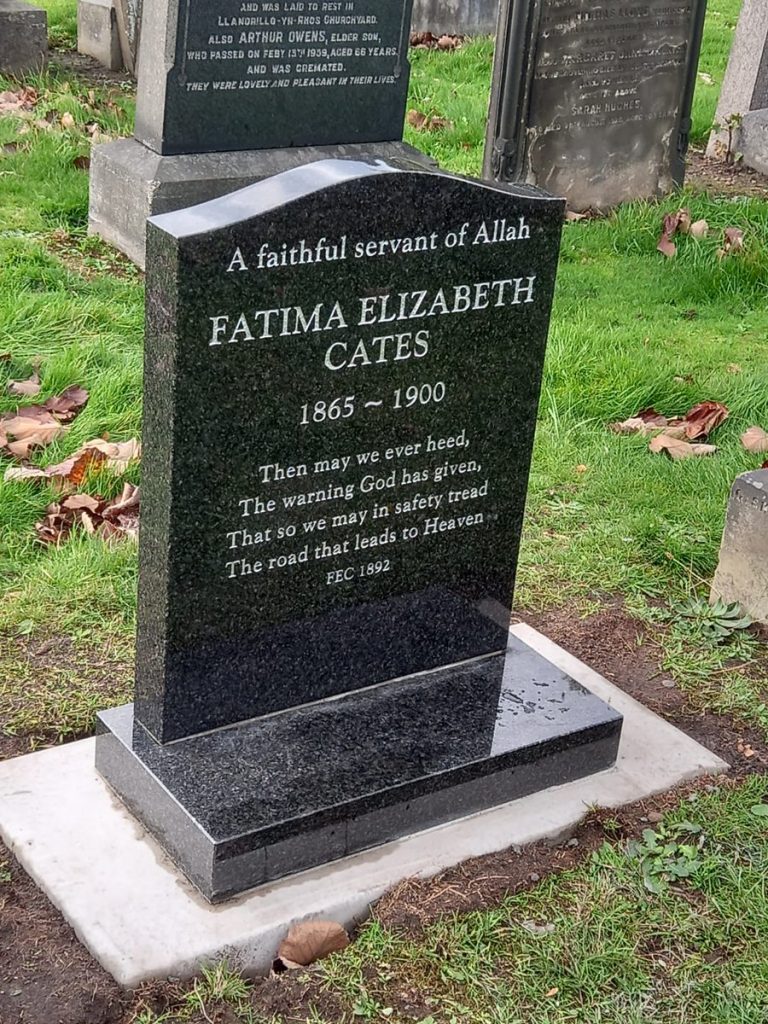 This is the story of Fatima Elizabeth Cates, who is known to be the first female convert in Victorian England.

Elizabeth Fatimah Cates, ‘The first lady who ever converted to Islam in England’ is buried here in Liverpool cemetery.

She was first introduced to Islam by Abdullah Quilliam when she was 19 years old. Quilliam was the first revert to establish a British Muslim community in Liverpool.

She was laid to rest in 1900 in an unmarked grave.

After a crowdfunding effort begun by Amirah Scarisbrick, a headstone has been appointed at her grave.

Quilliam’s newspaper, The Cresent, published a piece about Fatima’s life, and how she came to Islam in the 1800s. Her story, written by Fatima herself, is below.

HOW I BECAME A MUHAMMEDAN

When I was a girl about 19 years of age, I used frequently to attend the temperance meetings, and it was at one of these meetings I heard Mr Quilliam, who is well known in Liverpool as a great advocate of total abstinence, deliver a lecture on fanatics and fanaticism, in which he gave a very graphic account of the early struggles of our holy prophet Muhammed.

Up until this time I had always heard Muhammed described as an imposter and a bloodthirsty man, who forced people to believe in his religion by threatening to put them to death if they did not do so. I was, of course, much astonished at hearing Mr Quilliam giving a different account of him.

I waited until the end of the meeting, and I then asked Mr Quilliam to tell me something more about this religion, as I was very much in doubt as to the true faith.

He spoke to me for some time, in fact, he gave me a short sketch of the main principles of Islam and offered to lend me his Koran, in order that I could read it for myself, saying ‘don’t believe what I say, or what anyone else says, study the matter out for yourself.’

I thanked him and a few days afterwards Mr Quillaim gave me the Koran. I accordingly took it home and commences carefully reading the book. My mother, who is a most bigoted Christian, on perceiving this asked me what I was reading.
I answered, ‘the Muhammedan Bible,’ She replied angrily, ‘How dare you read such a vile and wicked book? Give it to me this moment and let me burn it. I will not allow such trash to be in my house.’

I answered, ‘no I will not. How can I know whether it is a wicked book or not until I have read it?’ she tried to take the book from me, but I escaped to my bedroom and locked myself in, and went on reading what I now consider the most precious book that could be bought.

I was continually scolded and threatened with all kinds of punishment if I continued to read such a book, but all to no purpose; for I persisted in reading it, and finally I had to carry the koran about with me, or during my absence, it would have been destroyed.

I then told Mr Quilliam I would attend his meetings if I might. He replied I could do so if I wished, and of course, I did.

At that time the only Musselmans in Liverpool were Mr Quilliam and Mr Hamilton. We used to meet, we three, week after week, and read the Koran and discuss matters.

It was with great difficulty I managed to attend these meetings, being constantly watched, or occasionally, by way of change, shut up in a room to prevent my going, as they did not wish me to become a Muslim, having been strictly brought up to Orthodox Christian faith, and it was because I declared my views contrary to theirs on Christianity that they thought I was being led away to some other faith, probably Roman Catholicism, which they held in abhorrence.

But on finding it to be the islamic faith words could not express their surprise and indignation. To their ideas, it was even worse, for they told me I was entirely lost, and that there was no possible hope of salvation for my soul unless I returned to my former belief.

I then declared myself a Muslim, and it was then that all kinds of devices were resorted to, to prevent my attending the meetings.

When Mr Quilliam first began lecturing Muhammedanism we used to meet in a little room, the entrance to which was up a flight of stairs in a side street, and the neighbours used to come and jeer at us, and sometimes they amused themselves by throwing stones and other filthy garbage at us as we entered or left the room in which we held our meetings.

It was very hard work at first, but we went on steadily. then another convert was made, Mr Wardle, then Mr Grundy, and gradually others, but for about twelve months I was the only lady who attended. now we have a nice little mosque, fairly comfortably furnished, but the mob still annoy us by throwing mud and stones; however, we persevere and are still making fresh converts.’ 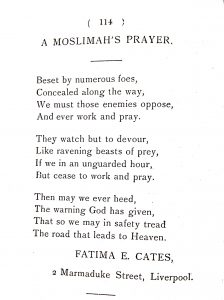 Credit to Fatima Elizabeth Phrontistery for compiling the research about Fatima’s life.