Combating addiction in the Muslim Community Combating addiction in the Muslim Community

Often times within our cultural communities, we shy away from discussing difficult topics. It’s almost as if there’s a belief that if we don’t talk about them, they don’t exist.

Out of sight, out of mind, as it were.

However, this mindset has led us to a generation of Muslims who suffer in silence with a variety of debilitating issues; mental health, addiction, identity, abuse… the list goes on.

It’s become the norm to feel that if we speak about our issues, we’ll be seen as ‘bad Muslims’ or we’ll be met with more stress from the judgement of family and friends than it’s worth.

We spoke to Asad, founder of Al Hurraya, a Nottingham-based group dedicated to eradicating stigma and finding practical solutions to addiction.

He told us how he felt he couldn’t turn to anyone when he was suffering.

“I’m the founder and CEO of Al Hurraya, but it was my personal journey through living as a young Pakistani male where I had mental health and substance abuse around me.

“A lot of people in the community suffered from mental health issues but weren’t able to get the right support. They weren’t able to identify the issues they had either.

“I wanted to talk about the issues I was going through but I couldn’t because there was so much stigma, shame and fear within the community.

“I felt very isolated. All my friends were struggling with similar things but we couldn’t speak to each other.

Whilst drug and alcohol abuse is lower within the Muslim community according to stats, this does not mean it doesn’t exist.

According to ISPU’s 2020 American Poll, 37% of Muslims say they know a person personally who has or is struggling with addiction, compared to 57% of the general public and roughly the same percentage among other faith groups.

This is just one example of how addiction and the lack of support and education surrounding ‘taboo’ subjects can have real-life consequences.

It’s time we break out of these archaic mindsets. In order to help our community, we must be more open to helping one another rather than berating.

It is only with this united front that we will be able to overcome these  issues.

“When it came to treatment, I wanted to do something, not just for myself but for the community.

“I thought that if I can get treatment and get clean, maybe my friends can, and I wanted to help everyone.

“This is when I set up Al Hurraya to deal with substance abuse. We used to do meetings at the Karimia Mosque every Thursday. We would get about 8/10 kids talking about not only drug or alcohol dependence, but family and relationship issues.

“They could openly talk about things that they were struggling with.

“Nobody wants to wake up one day and say to themselves ‘I’m gonna become an addict.’

“People don’t even know what addiction is. It’s a disease, it’s progressive.“

“There are people that can be judgemental because you are abusing substances. They think you’re no good when really it can be a by-product of abuse, trauma or unhappy life.“

Al Hurraya started out in 2014 as an addiction recovery group, however, Asad soon found that addiction was deeply intertwined with various other socio-cultural issues plaguing the community.

They now help individuals access education and employment and settle into new communities. They also work to eradicate the negative influences of crime, radicalisation and other addictions.

In order to create practical solutions to help Muslims overcome their addictions, Al Hurayya were the first to create a 12-step recovery process remodified for Muslims. This combines Islamic spiritual elements with psychosocial interventions.

“There’s a fellowship called Alcoholics Anonymous. when I was in recovery, they took me to meetings. I had to go to church. When I looked at it, I thought the programme was amazing.

“It’s so spiritual, but I thought I need to adapt it for Muslims.” 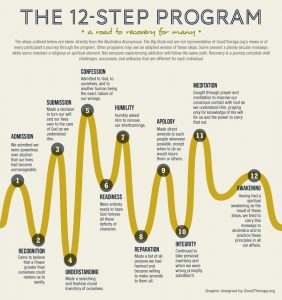 Asad summarised the 12 steps for us below.

“We will publish it and give this out to all the mosques in the community. It’s going to be out there for free. We’ll train people up to take others through the steps, and could even have the Imams trained up too.“

Addiction isn’t a stand-alone problem, often it’s a symptom of other underlying issues.

Because of this, Asad has branched out and focused on a variety of things, addiction, abuse, community inclusion and integration work.

“Al Hurraya has grown over the last six/seven years and does a lot of work within the community. We’re very solution focused and have identified a variety of issues, whether they be current or historic issues.

“We’ll look at patterns and trends from drugs and alcohol, hidden harm against mental health trauma, and children with adverse childhood experiences.“

It’s important to note that whilst this tailored 12-step recovery programme is revolutionary, it’s only half the work. Recovery is not a short journey.

“Even after 15 years of recovery, I’m still in recovery, you know.

“It doesn’t mean that now that I’ve stopped engaging in my addiction that’s I’m ok. My journey of recovery is something that will be forever. it’s very difficult to make somebody understand that when they’re not an addict with this disease.

People think once you stop, that’s it.“

If you or anyone you know is suffering from addiction, please reach out to some of the services below.