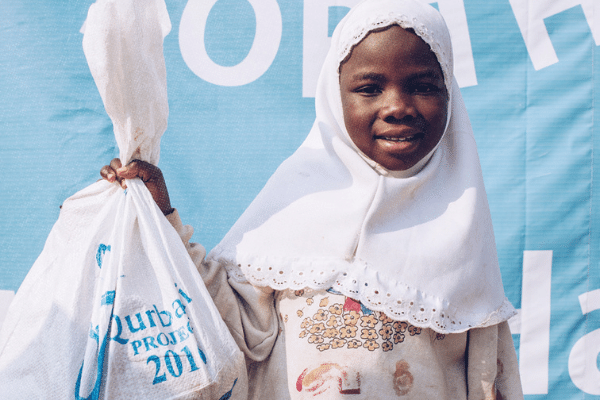 47-year-old Rukhsana Kousar and her five sons are living below the poverty line in a rural village in Pakistan. Her husband struggled with drug addiction and passed away last year. Rukhsana continues being the main breadwinner for her family, as a cleaner, making less than £30 per month.

She told our teams, ‘I usually don’t have enough food to feed my family every day. My place of work is kind enough to provide my family with a cooked meal. When I do cook, it is plant based as we can’t afford meat. The only time we do eat meat is during Eid al-Adha when the meat is given to us by Muslim Hands. I just want my sons’ dreams to come true, where we can live with dignity and my children can enjoy Eid like a normal child.’

UK charity Muslim Hands is distributing Qurbani meat in 26 countries, which will help feed 770,000 of the world’s neediest people. Countries supported will include Yemen, Kashmir and the UK, with the meat being distributed during the three-day Eid al-Adha festival, celebrated between 20th July to 22nd July.

More than 820 million people in the world suffer from food poverty (WHO), which is largely the result of conflict and climate change. Many of the beneficiaries supported by Muslim Hands have either been displaced because of war, such as those in Syria, are battling with severe malnutrition in countries like Yemen or have lost everything because of drought or flooding as in Malawi and Bangladesh.

Muslim Hands has been providing Muslims in the UK with a trusted Qurbani service for over 25 years, ensuring that the animals they sacrifice are healthy, the meat from their sacrifice is of high quality and distributed to those most in need across the world during the days of Eid. Teams on the ground must navigate the ever-changing situation, with 2021 proving a particularly difficult year.

In Yemen, for example, ongoing conflict, the pandemic and cuts to UK foreign aid are having a devastating impact. 16.2 Yemenis are food insecure with malnutrition rates highest amongst women and children. As part of the Qurbani programme, Muslim Hands will provide fresh meat to approximately 8,000 beneficiaries in the cities of Aden and Ma’rib.

Meanwhile, in the UK 8.4 million Brits are struggling to feed themselves and their families. Food insecurity has quadrupled during the pandemic and according to the IPPR, ‘Over 1 million more people faced poverty at the end of 2020 with 200,000 of these being children’. School closures because of multiple national lockdowns, meant that many children who were reliant on breakfast clubs and lunch provided on site, went hungry at home. Muslim Hands will ensure that as part of its Qurbani appeal, support will also be extended to the homeless and vulnerable in the UK through the Open Kitchen in Hounslow. Fresh meat will be used in nutritious meals they serve twice a day, seven days a week.

Yasrab Shah, Muslim Hand Fundraising Director, said: “At Muslim Hands we are grateful for the continued opportunity to provide blessed meat through our Qurbani programme for over 25 years.

“Qurbani symbolises sacrifice, unconditional love, and faith in our Lord. It is therefore beautiful to see our supporters keen in completing their religious obligation with Muslim Hands and showing their affection towards beneficiaries who are facing extreme hardship.

“We are humbled to be part of the joy that our beneficiaries will experience during the blessed festival of Eid al-Adha.”