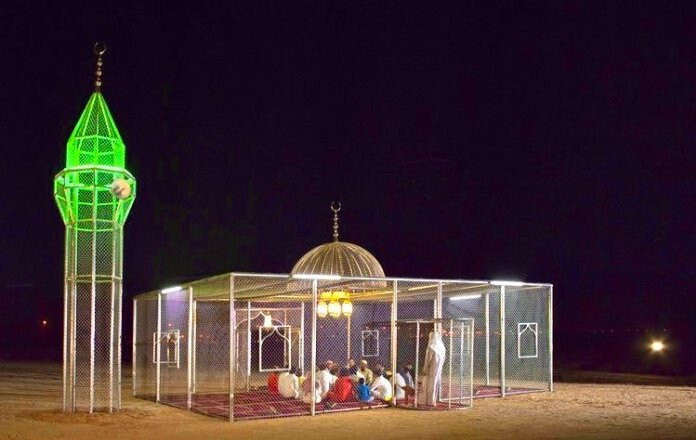 The classic mosque is reinterpreted in the installation, ‘Paradise Has Many Gates‘ by Saudi Arabian artist Ajlan Gharem, which won the V&A’s Jameel Prize.

Since 2015, ‘Paradise Has Many Gates‘ has been to Saudi Arabia, Bahrain, the United States, and Canada.

Each appearance is followed by a public calendar of activities, including readings, prayers, performances, and conversations.

Gharem created the work out of chicken wire to recall the imagery of refugee detention centres and border walls, and invoke associated feelings of anxiety.

He also wanted to investigate the effects of making the mosque transparent and open. This is to demystify Islamic prayer for non-Muslims.

“As this year’s Jameel Prize winner, Ajlan Gharem’s work speaks to global conditions and the experience of migrants, as well as being particularly resonant in its local context,” said V&A director and Jameel Prize jury chair Tristram Hunt.

“The transparent wireframe references border fencing but has the effect of demystifying the mosque for non-Muslim viewers,” continued Hunt.

“We also commend the use of the installation as a space for cross-cultural connection and community gathering.”

Measuring 10 by 6.5 metres, Paradise Has Many Gates is topped by a dome and accompanied by a minaret that lights up in green.

The minaret includes a sound system that issues a call to prayer made of voices from different Muslim-majority countries.

Gharem’s first installation of ‘Paradise Has Many Gates’ was in the desert, one hour’s drive from the Saudi Arabian capital Riyadh. 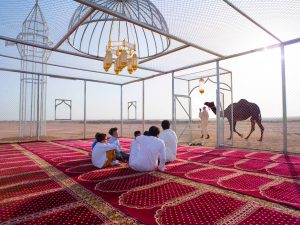