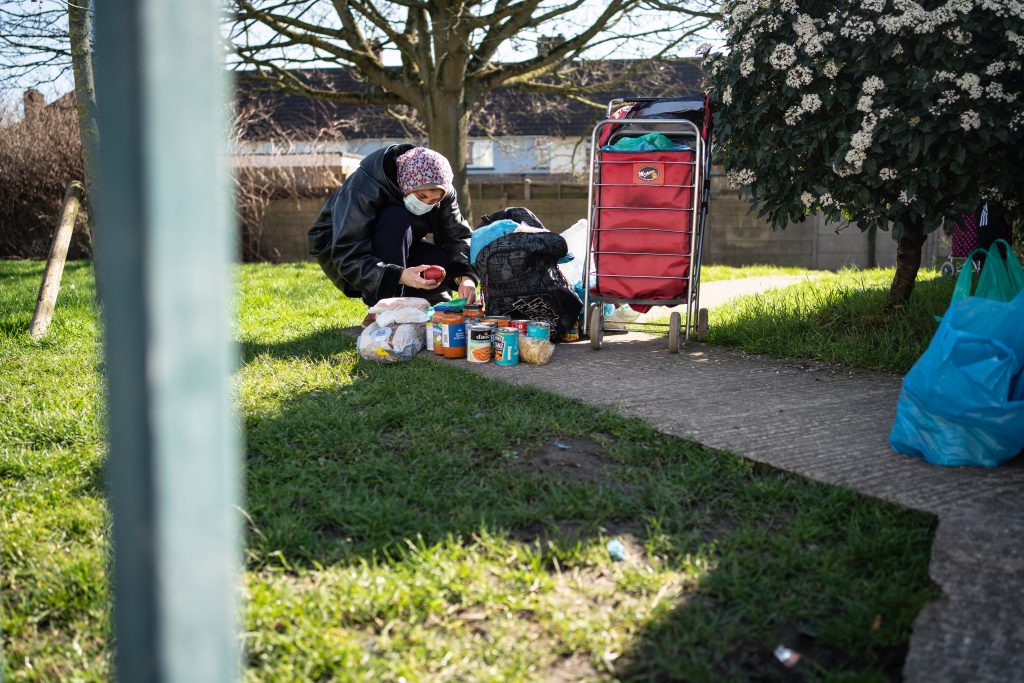 With an increase in living costs, the covid crisis and a lack of accessibility to sustainable resources, more people are being forced to turn to charities in order to survive.

Islamic Relief reported 50% of UK Muslim households live in poverty, compared to 18% of the general UK population (i). It can be difficult enough to source and reach out for food aid without the added worry of finding support that caters to halal dietary requirements.
Sufra, a food charity that’s been running for nine years, is one of the very few organisations that provide halal meat and meals to the community. They offer a variety of services to aid those struggling with food poverty, ranging from their food hub, hub on wheels, 5-day delivery service, community kitchen & lunchtime services in partnership with other organisations.

I sat down with Fahim, whose been at Sufra from the beginning, as he explained the motivations behind the charity.
“One of our underlying ethos as a charity is to rebuild the community. we break down a lot of the barriers that we have between ourselves to support each other. one of our roots out of poverty is to have a good, warm, loving community around you, regardless of ethnicity & religion.

“The charity started with two of us, me and the founder, Muhammad. we’ve grown significantly since then. We have a team of 12 staff now and have hundreds of volunteers. There’d be no way to make this run without them.
“We have extra special catering towards the Muslim community as the charity was set up by me and the founder who are Muslims, however, we didn’t set it up as a faith-based charity. Food is a human right. The halal meat will go out to everyone so there is fairness across all faiths. We don’t favour any ethnicity over another.
Whether they be vegans, vegetarians, kosher, or any dietary requirement, we tailor the food parcels to everyone’s requirements as much as we possibly can.”

According to the Government’s latest Family Resources Survey, 5 million people in the UK lived in food poverty between 2019 –2020. The Office for National Statistics also reported the Consumer Prices Index (CPI) rose to 6.2% in March, reaching the highest level since 1990 where levels reached 9.2%.(ii).

There’s been increasing pressure on food banks and charities to fill the gap in governmental support and help for those struggling. This doesn’t just include families on the breadline; more and more people from all walks of different classes, jobs and upbringings are becoming increasingly reliant on charities to help them get by.

“The government are relying on us to be a part of their welfare system without providing any finances to do it. We run fundraising campaigns to keep us going, says Fahim.

“10 years ago, there were MPs denying the existence of food banks and making very ignorant comments about them being barely used. The pandemic exposed that.

“We’re not hiding the fact that food banks are an inefficient way to tackle food poverty, but it’s our only method at the moment. People have told me ‘you are part of the problem; if you close your doors tomorrow, people will have no option and the government will have to do something.’

“The government are not going to turn around tomorrow and do something, it’ll take years to implement and take effect. In that time period, how many people are going to starve and die? I can’t turn my back on them.

We didn’t open to create a problem, we opened because there was one existing and wasn’t being tackled.

“Currently, we do have a campaign going on called the right to food and rent which comprises of a few organisations hoping to change legislation. Sufra are also working with IFAN, an independent food aid network in order to tackle change. We’re building up our advocacy in order to make a change at a national level.“

IFAN is an organisation where small food charities and organisations from across the country can unite in their fight for a world without charitable food aid, as well as a place to make political change.

“UK poverty has been around for a long time, it’s just been hidden, because it’s behind closed doors, it’s not a child covered in flies, but it’s always been there, and this sheds a light on it.”

The Trussel Trust is another organisation working tirelessly to end UK food poverty through legislative change, partnered with a multitude of food banks throughout the country. They are currently running a 5-year campaign to end the need for food banks, which you can follow along with here (2020-2025).

“People are telling us they’re skipping meals so they can feed their children. That they’re turning off essential appliances so they can afford internet access for their kids to do their homework. How can this be right in a society like ours? And yet food banks in our network tell us this is only set to get worse as their communities are pushed deeper into financial hardship. No one’s income should fall so dangerously low that they cannot afford to stay fed, warm and dry” (iii).

Dependency on food banks to compensate for the increasing reality of poverty for many in the UK is at an all-time high.
Fahim concurs with this statement as he tells us about his own experiences working at Sufra.

“We’ve had a 400% increase since covid. We need to find ways to keep up with the demand. I’m working over 12 hours a day and trying to keep things going; I want to make sure that people have food at the end of the day.
Pre pandemic, we were considered a busy food bank, but now it’s just insane. Our working capacity has remained 200% above pre-pandemic levels since. Now we’re seeing levels slowly rise again.”

Our aim is to feed people and meet their immediate needs, but we can’t make people dependent on us. we can’t afford to feed everyone all year round. the key is getting it through the door to give them the aid and identifying them through that method.

In order to tackle food poverty, the underlying causes of poverty need to be addressed. That’s why Sufra also strives to aid those suffering from homelessness and social isolation in the community. They run a variety of other services such as general advice, employability support, and social regeneration projects for the community. They also offer specialist advice for refugees and asylum seekers.

“We focus on getting them acclimatised to living in this country & advising them. What you see a lot of the time is they’re left in the lurch. They don’t know what to do, they might get bad advice, or just try and guess and end up in severe debt, homeless or in overcrowded housing.”

Sufra has launched a petition in a joint initiative with the Trussel Trust, IFAN and Feeding Britain to put pressure on the government to help tackle the cost of living. To sign it and be an advocate for change, click here for the petition link.

If you want to support Sufra, or want to learn more about the services they offer, you can find out more information here.

The interview has been edited for clarity*