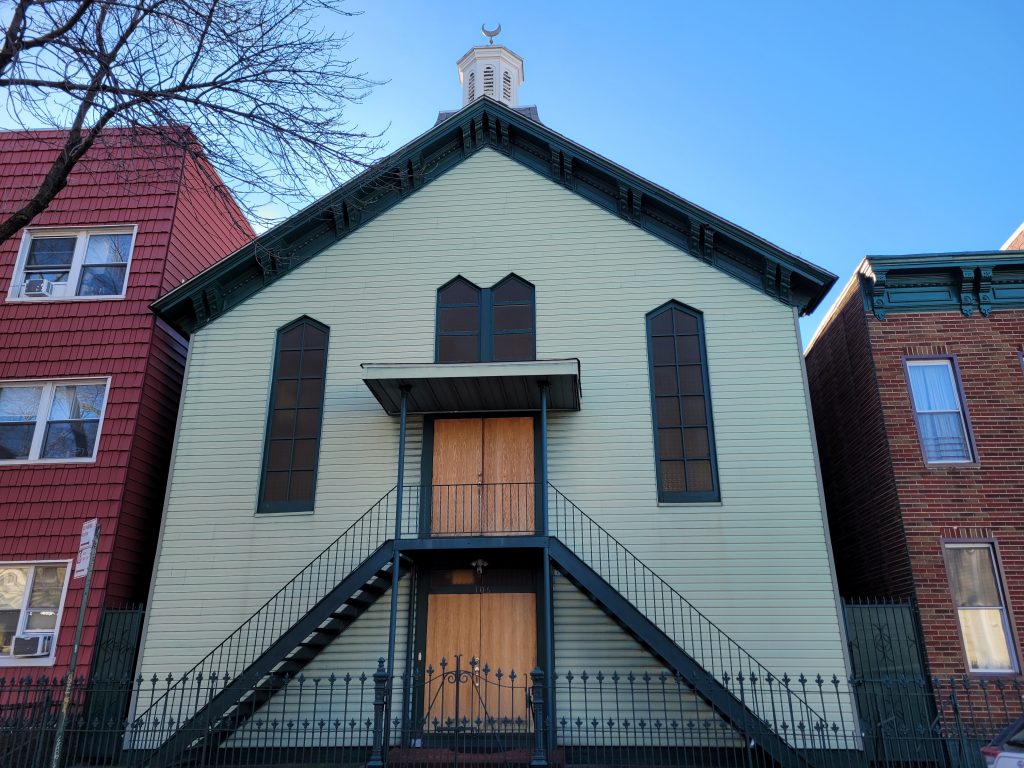 Have you ever wondered where America’s oldest Mosque resides?

In Williamsburg, Brooklyn, NYC, you’d probably walk right past it without knowing.

Cosplaying as just another house on the street, it’s easy to miss. Detached with white slats, if you look closely you’ll be able to identify it from the white turret with a crescent moon that mounts the building.

The history of this Mosque is interesting. Foundations for the building were first laid on 104 Powers Street in 1885 for the Powers Street Methodist Episcopal Church.

Contrary to traditional mosques that face the Ka’aba in Mecca, 104 Powers Street was not built with the intention of becoming a mosque; instead, it has served as a District Assembly Clubhouse, a Gospel Church, an Episcopal Church, and a greenhouse.

Congregants stand at an angle to pray, and a temporary partition divides the women’s prayer area from the men’s section.

An old newspaper clipping highlights the history of the Mosque. An excerpt of the archive reads below.

“Many people hurry past a plain frame building at 104 powers street in the heart of Williamsburg, without a further glance, not knowing about the old and unusual religious community that worships there.

“Known simply as the Moslem mosque, the structure houses what may be the oldest Mohammedan community in the united states.

“The founders of this unique Williamsburg congregation were not men from Arabia, turkey or Persia, but immigrants from Poland, Byelorussia and Lithuania.

“They were and are descendants from the mighty Tatar hordes of Genghis khan.

“Of the two religious leaders of the community, Imam Yasinksky, born in Kleck, near Minsk, the present capital of Byelorussia, represents the older generation.

“Imam Ratkhewitch, although trained in his religious studies in pre-world war II Poland, was born in Bayonne, N.J. Like many of the congregation today, he is of the younger generation.” Who exactly are the Tatars?

The Tatars were descendants of the feared Mongols who lived in Crimea.

Due to the fearsomeness of the Tatar warriors, the King of Poland and Lithuania sent a few hundred of them to Eastern Europe 600 years ago to defend his territory.

Although they maintained their Muslim beliefs, the Tatars established themselves in Eastern Europe and became fully assimilated.

The Tatars moved to America along with many other Poles and Lithuanians, and they settled in North Brooklyn, where they established a place of worship.