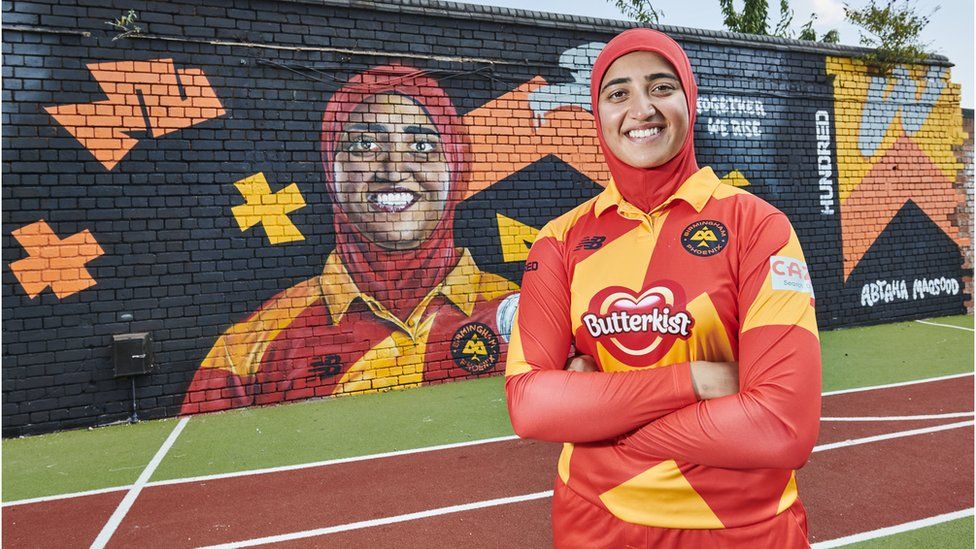 A mural of Britain’s first hijab-wearing cricketer has been unveiled at a primary school in Birmingham.

The painting was ordered to commemorate her securing a contract extension with the Birmingham Phoenix, who will compete in The Hundred tournament the following month.

Maqsood, 23, described seeing his face painted on the wall as a “surreal experience.”

On Monday, the cricketer went to the Small Heath school which has a large student population of Muslim girls, to witness the painting that graffiti artist Lucy Danielle had painted.

“I had no idea I had made such a large impression,” stated Maqsood.

About 75 schoolgirls from Leigh Trust’s schools saw her play cricket and participate in a Q&A; several of them told her it had been motivating to see someone play who “looked like them.”
Maqsood stated that there are some cultural barriers, particularly for South Asian girls who play sports.

I hope even if a handful at least start playing cricket then that’s a benefit for me,” she continued.

Sajjad Gulamhusein, from the mosque, said: “Traditionally, cricket has predominantly been considered a male sport. Abtaha is an inspiration to girls who want to continue to wear hijab but also pursue sports at the highest level.”

As a Scottish native, Abtaha was scheduled to compete at the Commonwealth Games this summer in Birmingham, but Scotland was unable to advance.