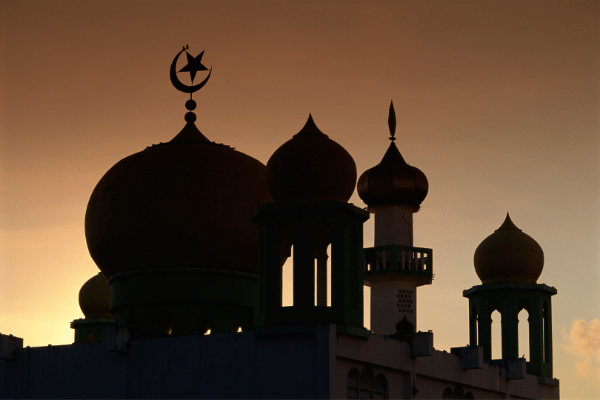 The UK’s first green mosque is considered the “cultural bridge” between Islam and Britain in the 21st Century. Cambridge Central Mosque, in Mill Road, cost £23m and has a capacity for 1,000 worshippers. The mosque includes a prayer hall, ablution areas and accommodation for its Imam’s family and visiting scholars. It boasts zero carbon on-site emissions, rainwater harvesting and air source heat pumps.

Pictured above is The Aziziye Mosque in Hackney, East London.  Despite a succession of name changes, it began life as a cinema and continued as such for the next 70 years. It first opened in 1913 as the Apollo Picture House, then reopened in 1933 as the Ambassador Cinema, then became the Astra Cinema in 1974, showing martial arts and softcore sex films before closing in 1983. The mosque was built thanks to the support of the UK Turkish Islamic Association.

The total capacity of its Ottoman-style mosque is 2,000 people. The institution includes a Halal butcher, a weekend school (Aziziye Education Centre), a wedding hall and a restaurant.

Near Regent’s Park, the Islamic Cultural Centre is one of two London mosques that have been granted protected heritage status in recognition of their historic, architectural and cultural significance. The piece of land was originally presented as a gift to the Muslim Community by the British Government who played a crucial role in fighting the Axis Powers. and from which the Centre was officially inaugurated by His Majesty King George VI in November 1944.

The mosque took over two years to complete at the cost of £6 million with a generous donation from H.M King Faisal of Saudi Arabia and was later completed by His Highness Sheikh Zayed of the United Arab Emirates.

The mosque was England’s first official venue of Islamic worship. When Queen Victoria visited Windsor Castle, her Indian attendants and her Indian secretary, Abdul Karim, used the mosque. Since its inception in 1889, the mosque’s popularity has risen and fallen.

This mosque is a true testament to that pioneer generation of postwar Muslim immigrants, mostly from India, Pakistan, and Bangladesh, who battled poverty, exclusion, and racism and succeeded in establishing a Muslim social and religious infrastructure in Britain through decades of sheer persistence, inventiveness, and determination.

The mosque was built in 1996 and has a capacity of 6,000 attendees. Construction began on 15 March 1992 during Ramadan. Each night throughout its construction, a hafiz recited the Quran on the construction site. Building work ended in 1996. It can fit up to 5,000 people at one time.

The Masjid is named after a Sufi Saint’s place of residence, Ghamkol Sharif near Kohat, northern areas of Pakistan. Sufi saint Zinda Peer Sahib’s followers are spread in various countries and especially in the UK.

Birmingham Central Mosque is one of the country’s first purpose-built mosques. After originally obtaining funding to lay the mosque’s foundations, funds ran out. The mosque trustees solicited donations from local businesses, both Muslim and non-Muslim. Money was raised to pay for the mosque’s construction and completion in 1969. The mosque was then officially opened in 1975 as the largest mosque in Western Europe.

Since the mosque’s inception, it has become a focal point for the Muslim community. Over the years, Muslims have used the mosque for events, meetings, lectures, studies and community and educational purposes. The mosque has a capacity of 6,000, including women. The mosque also provides a Sharia Council.

Pictured above is the prayer hall of Manchester’s Didsbury Mosque. The structure was formerly the ‘Albert Park Methodist Chapel,’ which first opened for worship in 1883 and closed in 1962 before being turned into a mosque. It has around 1,000 attendees.

Manchester’s Didsbury Mosque is a stunning structure. Most of South Manchester is covered by the mosque’s radio programme. Prayers, Friday sermons, and talks and lectures delivered in the mosque prayer hall are all broadcasted. The Manchester Islamic Centre is a charitable organisation that is registered with the Charity Commission.

The Mosque was built in 1983 and cost around three million pounds. Retired businessman Muhammed Tufail Shaheen MBE, an active community leader and President of the Glasgow Central Mosque, was instrumental in its building. It was formally opened in 1984 by Abdullah Omar Nasseef, the Secretary-General of the Muslim World League.

Glasgow Central Mosque is the first purpose-built mosque in Glasgow. It works with other mosques throughout the city to help and represent Muslims from every background. It is one of the most recognised buildings in the city and as a result, a large number of people visit it throughout the year.

The Faizan E Madina Mosque in Millfield, Peterborough, is pictured here, not far from the city centre. It is one of Western Europe’s largest mosques, with three floors and a capacity of around 3000 worshippers at any given time. Construction of the mosque, which serves a quarter of the city’s Muslims, began in 2006.

The Masjid was a vision of the Community in Peterborough and it was built with their help, guidance, and supervision. The foundation of the Masjid was laid in 2006 and the overall cost of the project amounted to approximately £3 million. Many volunteers kindly donated their labour and skills to the construction of the Masjid.

Al-Jamia Suffa-Tul-Islam Grand Mosque is a flagship Masjid and educational institute in Bradford, West Yorkshire. It was founded in 1983 by Shaykh Muhammad Habib-ur-Rehman Mahboobi who is a Sufi Master of a unique Khanaqah of the Qadri and Naqshbandi Sufi Orders.

Al-Jamia site borders the City centre, the city’s educational institutions, as well as the Bradford 5 and Bradford 7 areas. The architecture and serene setting of the Al-Jamia complex has already attracted national and international interest. 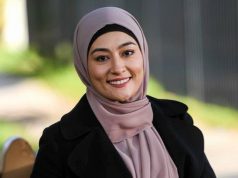