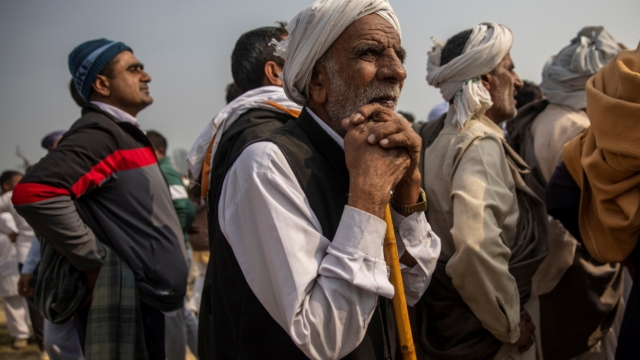 More than 200 Indian farmers’ supporters clashed with police on Wednesday, as protesters continue to challenge the government’s controversial agricultural reforms.

For over two months thousands of protestors have been protesting peacefully against new farm laws in an attempt to force the repeal of laws that they believe would end government-set prices and force them to sell to powerful corporations.

In an attempt to curb the voices of the protestors the Indian government all internet services in parts of Delhi and Haryana. This move was criticised my celebrities all around the world including pop-singer Rihanna, climate-activist Greta Thunberg, niece of the current Vice President of the USA, Meena Harris and many more.

The Indian government responded to the heightened attention from celebrities, saying “the temptation of sensationalist social media hashtags and comments, especially when resorted to by celebrities and others, is neither accurate nor responsible.”

Soon after the tweet by Rihanna, many Indian celebrities have come forward to criticise the singer of inciting hate and spreading propaganda against the Indian Government. Many of them including Indian cricketer Sachin Tendulkar took to their own social media platforms and encouraged Indians to not show support to these ‘external forces’.

This move by the Indian government is very similar to the one in 2019 when the government imposed a months-long internet blackout in Indian-controlled Kashmir after the government removed the Muslim majority state of Kashmir’s protected autonomy by writing it out of the constitution.

That caused the biggest protests and sit-in protests in the history of India with number of protestors killed and thousands arrested. The protests only ended in March 2020 due to the coronavirus pandemic.

There is a raging debate within the Muslim community in India in the middle of the ongoing farmers’ strike, as to whether or not they should take part in the farmers’ protest. Within the community, there is a kind of apprehension, particularly among the community elders, about the impact of involvement in the ongoing protests.

Not only at the neighbouring boundaries of Delhi with Haryana and Punjab, but also Uttar Pradesh, Bihar and elsewhere where the protests were most visible, Muslims were visible among the protesters. Hijabi women joined the farmers, addressing the crowd and sitting in for whole days in the demonstrations.

Since the beginning of the anti-farm protests, Muslims have been serving food to protesting farmers from day one. The pictures of Sikh people standing in solidarity with Muslims offering prayers have gone viral at the farmers’ protest site near Delhi. There are doctors from the medical hospital of Aligarh Muslim University who are set to enter the protest and take care of the protests’ welfare.

The Sikh community were frontline supporters of the protestors during the 2019 protests and stood in solidarity with the Muslim community all over India.