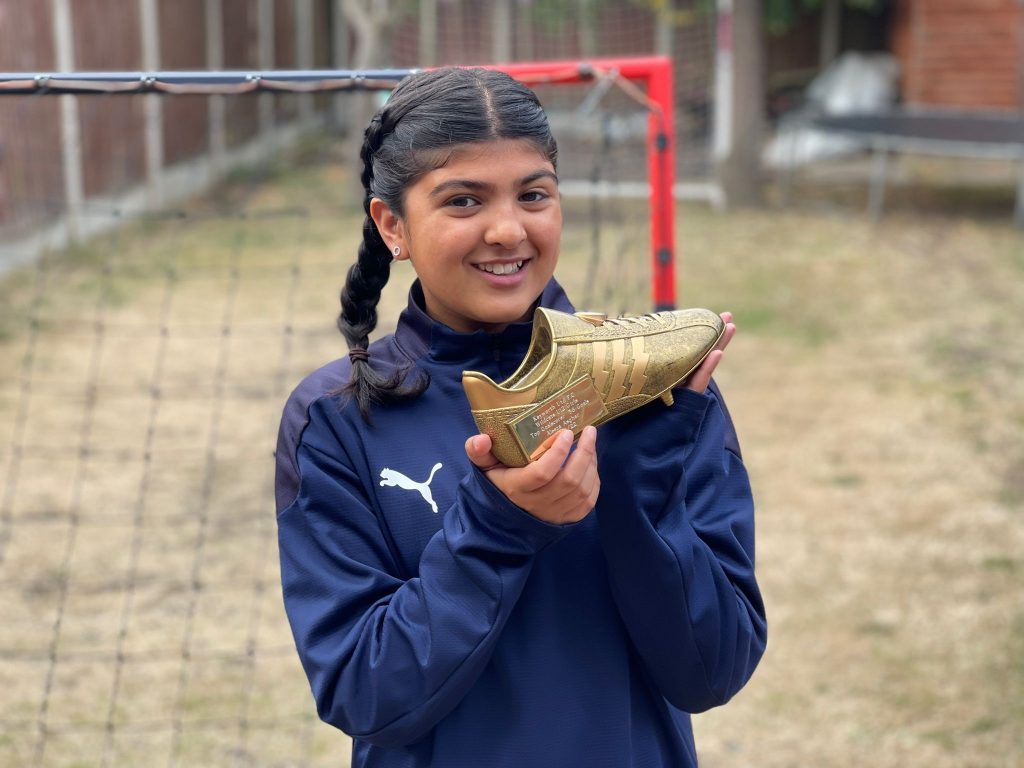 Aleeza Asghar just signed to Notts County Women’s FC after a prolific season of scoring 56 goals for Keyworth United FC. At only 12 years old, Aleeza is on her way to kickstarting her career in football and being an inspiration to others in the South Asian community.

We caught up with her and her father, Suheal, to talk about her achievements.

Was football a big sport in your household?

Yeah. My dad and brothers played football, so I just started playing football.

At what point did you realise that football was something that you loved?

Probably when I first joined my team. That was when I realised how good I was. I never played against any other girls before or played with anyone really. I would only play at home.

As her father, at what point did you kind of realise that maybe, you know, we’re onto something here?

I think it was when she was she used to play regularly in the garden with us. My dad was a very good athlete in Pakistan and we’re three boys, so we’re really sporty in our house. I played professional-level football for a while. My youngest son has just signed for Stoke as well now.

My younger brother actually said it to me. He said she’s a natural goalscorer. She used to come train with me and one of the managers, Mark Ritchie, spotted her there. He asked her if she wanted to play.

She agreed, even though she’d never trained or played with a team. That season, she was tremendous. She scored 38 goals in her first season. In her second season, she then scored 56 goals. It’s then we knew she’s got a really good talent for the back of the net.

Aleeza, were you surprised at how well you did, considering you never trained before?

Yeah, because I hadn’t played for a team before. I didn’t realise how good I was compared to them, and I didn’t have any experience playing against them. That first training session really helped me because it helped me realise what my competition was going to be.

How do you feel about being signed to Notts County? I mean, it’s a really big achievement.

It was always my dream to play in competitive women’s football for the Super League.

It was never my or my parent’s attention to get me into a team; the way I got into the team was accidental, but once I got there, I didn’t regret it at all.

How do you feel about Aleeza being the only Asian player on her team?

Our manager, Mark Richie, saw a lot of raw talent in her and worked very hard. For me, it was a big thing because he was very welcoming. We were the only Asian family there and she was the only Asian player playing.

It could’ve been quite daunting for her, but she actually grew in confidence with that. Notts County’s manager, Ash, is really great with her and gave her a lot of confidence. She saw a massive improvement straight away.

It’s a team sport. It’s the support mechanism you get from your coaches, your teammates. She scored 56 goals last season, but if people didn’t pass the ball she would never have scored, so we always give a lot of credit to them.

Aleeza, how are you inspiring your community?

How do you feel as a father seeing Aleeza grow from playing football with you in the back garden to being signed by Notts County?

Really proud of what she’s achieved in such a short period of time. She’s only been playing football for two years. She’s worked extremely hard at her game. We’re really proud and it’s a family effort. My lovely wife makes sure she’s eating the right foods so she’s got a lot of energy for games. My little boy plays so we take him for training. My dad will take them both to training and to games.

My younger brother, he will take them for training because it’s a family thing. It’s a lot to manage, it just means that we’ve got to manage it well. It takes up a lot of time, but she puts a lot of sacrifices into it.

It takes a lot of sacrifice on your end because you’re not really doing what normal 12-year-olds do. When you’re doing so much training, do you feel like you’re missing out?

We went to visit my sister in Kent and she wanted me to stay over for a week, but I have my training, so that was a sacrifice, because my other cousins also went and I’ll miss out on seeing them. But it’s not something that I would I’m upset about because I still get to do what I want to do. I would have played football there, just not as much!

Suheal, how were the reactions from your family when you told them?

“They were really happy. I mean, it’s quite funny. We’re quite a large family anyway. My four little ones and then my wife all go watch the game. I’ll be honest with you, I do a lot of travelling, but my wife is instrumental with the food she eats and the timing that she eats. When you’re playing at that level, little things make big differences.

Everybody’s really, really proud of what she’s achieved so far. We want to support her more and just work with her ambition. There are a couple of things that are non-negotiables.

She has Quran classes, so when she comes back from school, her schedule is extremely hectic. She’ll have a football kit on underneath her jubbah, and we’ll go straight to training after.

Once we finish training, she comes back, and some nights she’ll have tuition, which is the other non-negotiable. There is a life after football, and it’s very challenging to become professional football in the first place.

You always have to have a plan B, and put yourself in a good position. She understands that now, and I’m very proud of her because it can be quite difficult to manage the time to do all these things.

I’ve always said to it’s down to her whether she’s committed to do it or not. If she’s training too hard or running too much, then we can knock it on the head. But I let her lead it, because I think that’s the right thing to do.

Aleeza, is football something you see that’s going to be a part of your life forever?

After England won the women’s Euros, it’s made me want to play even more. My dream was to play in the women’s Super League and then get into the England squad. I’m still gonna try my hardest and work as hard as I can to get there.

During the middle of the season, I fractured my ankle on my left foot and my recovery was very up and down. I didn’t let that stop me.

It could have made me say, ‘I don’t want to go today.’ But it just made me more hungry. I realised if this is how I feel when I miss out on football, what would happen if I just stopped playing football? I didn’t realise how much it affected my life. My Mum would laugh at me because I felt so bored like I had nothing to do.

I think my parents have really helped with my mental strength. Every day, before training, my dad will always say ‘Go out, work hard and put all your effort in.’ After training, we would have another chat, talk about what went well and ask me what I could improve on.

You mentioned to me that this was always your dream, and you always thought it would never really happen. Do you have anything to say for young people out there who also have a dream and they don’t know how to get there or they don’t think it’s going to happen?

If you have a dream, then just work as hard as you can and put in as much effort as you can. If you want to play football but it might be harder for you, don’t let that get to your head. Don’t let other people tell you that you can’t because of any reason. Just do it.

If you want to do it, then you have to put your mind to it and work hard. You might have to sacrifice things, which look upsetting or bad right now, but later you’ll realise how much of a difference that makes.